“The search engine is the most powerful source of mind control ever invented in the history of humanity,” according to Robert Epstein, senior research psychologist at the American Institute for Behavioral Research and Technology in California. “The fact that it’s mainly controlled by one company in almost every country in the world, except Russia and China, just astonishes me ... We have determined, through our research, that the search suggestion effect can turn a 50/50 split among undecided [voters] into a 90/10 split just by manipulating search suggestions.”

Google later issued a statement: "We don't bias our search results toward any political party. Sometimes people vandalize public information sources, like Wikipedia, which can impact the information that appears in search. We have systems in place that catch vandalism before it impacts search results, but occasionally errors get through, and that's what happened here."

But Google did not disclose how many people in California were exposed to the misinformation Google propagated on the internet--California page views data available to Google via its own geolocation analytics--millions?

What should be the consequences when a $784Billion search engine monopoly propagates obvious factual misinformation to an electorate searching for "factual information" right before an election? This "misinformation" was presented by Google as "factual content" on the right side of its search results page--not just links in response to a search query--Google makes most of its money from advertising, but Google has also chosen to be in the content publication business on its search engine results pages, and no one is holding Google accountable for its propagation of factually incorrect content to a gullible public, except, perhaps, the European Union.

In a 2015 study, Epstein and Ronald E. Robertson reported the discovery of what they consider “one of the largest behavioral effects ever identified”: the search engine manipulation effect (SEME). Simply by placing search results in a particular order, they found, voters’ preferences can shift dramatically, “up to 80 percent in some demographic groups.” See The search engine manipulation effect (SEME) and its possible impact on the outcomes of elections | pnas.org.

This is far beyond any alleged Russian manipulation via Facebook or Twitter, or "fake news" propagated in the form of "infotainment" by the likes of CNN, MSNBC, FOX, ABC, CBS, NBC, et al, or even the now comical Trump Derangement Syndrome (TDS) bias regularly exhibited by members of the Washington, D.C., press corps, including Washington Post and New York Times.

And the issue goes deeper than just manipulating elections. Tristan Harris, a former design ethicist at Google who has since become one of Silicon Valley’s most influential critics, and co-founded the Center for Humane Technology | humanetech.com, an organization seeking to change the culture of the tech industry, described the tech industry as an “arms race for basically who’s good at getting attention and who’s better in the race to the bottom of the brainstem to hijack the human animal.”

Of course, the above is just one of many issues Meeker missed--here's another: A Constitutional Conundrum That’s Not Going Away—Unequal Access to Social Media Posts | Electronic Frontier Foundation | eff.org: "Among the many privacy challenges posed by social media, one has flown largely under the radar: balancing defendants’ due process rights to access exculpatory information against the crucial privacy protections of the Stored Communications Act (SCA). Here’s the problem: prosecutors have broad powers to demand access to stored communications [data] as necessary to pursue their case, but defendants do not ..."

2) Most Hyperscale Data Centers are Operating in the U.S. | Statista.com: 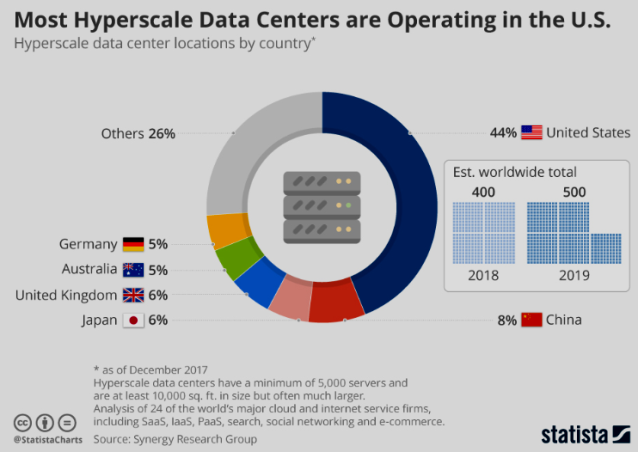 Hyperscale data centers have a minimum of 5,000 servers and are at least 10,000 sq. ft. in size but many are much larger. The data in the chart considers operations by 24 of the world’s major cloud and internet service firms, including Amazon/AWS, Microsoft, IBM, Google, Oracle, Alibaba, Apple, Twitter, Facebook, eBay, LinkedIn, Yahoo, Tencent, and Baidu. See Hyperscale Data Center Count Approaches the 400 Mark; US Still Dominates | Synergy Research Group | srgresearch.com: the next most prominent locations after the U.S., are China, Japan and the UK.

The Week-- NASDAQ Composite +1.6% | S&P 500 Index +0.5% | DJIA -0.5% --Investors welcomed strong economic reports, including a solid jobs data for May, while shrugging off concerns over Italian politics and trade wars.

Yesterday’s #BeigeBook gave the #Fed a green light to hike #rates again in June. Not only does the labor market remain tight, but some districts even said their retail contacts were in a better position to raise prices & pass along #inflation. Keep a close eye on Fed Funds
— DataTrek Research (@DataTrekMB) May 31, 2018

Investing Notes: Fallout from Italy's political crisis (apparently averted for now)--Investors mistakenly assumed the world was in a phase of synchronized growth, economist Mohamed El-Erian said on Tuesday, noting "People are now realizing the only economy with real legs to it was the U.S. economy"-- cnbc.com.


"The European Union is mired in an existential crisis. For the past decade, everything that could go wrong has gone wrong. How did a political project that has underpinned Europe’s postwar peace and prosperity arrive at this point?"--George Soros--"The strength of the dollar is already precipitating a flight from emerging-market currencies. We may be heading for another major financial crisis."