ICANN's New gTLD Domains Are Failing Badly, 2015 May Be Even Worse

If you want just an "opinion" about ICANN's new gTLDs (new generic Top-Level Domains), you can find plenty of hucksters hawking their hokem on countless "domaining blogs" and elsewhere on the internet, as well as at numerous "domain name conferences," but for now, let's just look at the facts--the actual registration numbers as reported by ntldstats.com (*data capture as of January 2, 2014 @ 10:33 am EST): 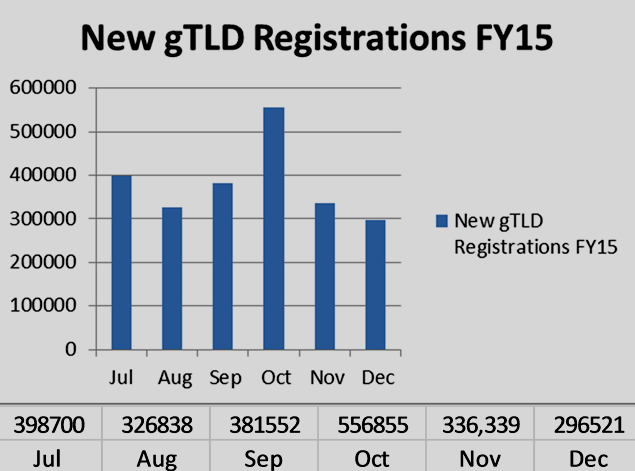 According to ntldstats.com* there were 1,418,338 new gTLD registrations at the end of FY14 (June 30, 2014). If you subtract that from 3,715,143 total new gTLD registrations at the end of calendar year 2014,* then there were only 2,296,805 new gTLD registrations in the first-half of FY15 (including the hundreds of  thousands of new gTLD registrations given away for free!) --meaning ICANN and "whomever ICANN listens to," were "delusional" about the demand for new gTLDs. Of course this shouldn't surprise anyone--ICANN made monumental mistakes in its new gTLDs program, including not considering "registrant demand for new gTLDs" as a "relevant factor" in deciding whether to even authorize any new gTLDs. Instead ICANN decided to just flood the Internet Domain Name System (DNS) with hundreds of unwanted, unneeded domain extensions because there were fools willing and able to pay ICANN $185,000 per new gTLD for the right to do so, or to participate in ICANN's auctioning off of the Internet DNS to the highest bidders. Remember, for ICANN, itself a monopoly, "It's all about the money" and to heck with the public interest and Internet security and stability.

Based on the trends thus far (see chart below), new gTLD registrations for all of FY15 will not only fall far short of the ICANN budgetary estimate of 15,000,000, but in fact will be "lucky" to total even a third of that (5,000,000). And that is without even taking into consideration that renewals of new gTLD registrations will begin in 2015 for the first time--how many domain name registrants who received those hundreds of thousands of "free" new gTLD domain name registrations in 2014, will actually pay to renew those mostly worthless new gTLD domain names in 2015?