The Internet, Social Media, and Counter-Terrorism: Reclaiming the Web 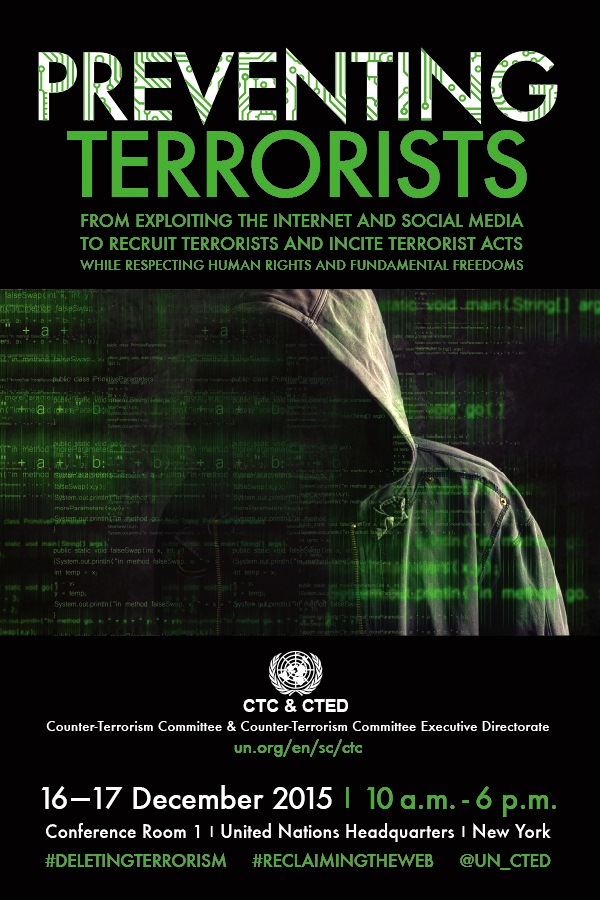 Special meeting of the UN Security Council Counter-Terrorism Committee and technical sessions of the Counter-Terrorism Committee Executive Directorate on preventing and combating abuse of ICT [information and communication technologies] for terrorist purposes, New York, 16-17 December 2015.
Excerpt from Concept Note (pdf):
Terrorist groups have proved in recent years that they are particularly adept at utilizing the Internet and social media to facilitate their activities, including incitement to commit a terrorist act, radicalization to violence, recruitment, training, planning, collection of information, communication, preparation, financing and execution of attacks. In addition to Al-Qaida, one terrorist entity that has benefited significantly from ICT is the Islamic State in Iraq and the Levant (ISIL), also known as Daesh. ISIL and its supporters exploit the Internet as a means to broadcast its ideology and has made effective use of the vast reach and rapidly evolving communications environment provided by social media applications, which also serve as a highly effective tool for ISIL recruiters, who have succeeded in attracting a global pool of around 25,000 foreign fighters from over 100 States.

Excerpt from CTC event website:
"Terrorist groups continue to utilize the Internet and social media to facilitate their activities, including incitement to commit terrorist acts, radicalization to violence, recruitment, training, planning, collection of information, communication, preparation, financing, and execution of attacks. Surpassing Al-Qaida, the terrorist organization that calls itself the Islamic State in Iraq and the Levant (ISIL) has successfully used the Internet to broadcast its ideology and to recruit foreign terrorist fighters on an unprecedented scale – with currently some 30,000 foreign fighters coming from over 100 countries. On 17 December 2015, the Security Council Counter-Terrorism Committee (CTC) will hold a special meeting on Preventing terrorists from exploiting the Internet and social media to recruit terrorists and incite terrorist acts, while respecting human rights and fundamental freedoms. This meeting will be complemented by CTED-organized thematic sessions (16-17 December), which will all take place in Conference room 1. The meeting will feature panellists from inter alia Facebook, Google, Microsoft, Twitter, and Weibo, as well as the Chief Prosecutor of Paris, and civil society activists engaging with terrorist recruiters on the digital frontlines." (emphasis added)

The briefing is open to Member and Observer States, United Nations entities, intergovernmental organizations, and specialized agencies. The event is also open to members of the media, including photographers, with a valid accreditation to the United Nations in New York.