"Again for a lot of you who are new maybe just a very, very brief overview of the contracts that we have particularly com and net those two domains renew every six years .net renewed in 2011 and will renew again in 2017 .com renewed in 2012 and will renew again in [November] 2018. Both of those contracts have a presumptive right of renewal, which means as long as there is no breach without a cure than those contracts will be renewed and that presumptive renewal provision has been successfully executed and tested in 2011 and in 2012. As to the pricing question with .net, we are allowed to increase prices 10% per year, with .com currently the price is fixed at $7.85 per domain and just a brief history of how that came about wide is, I think it’s early to speculate about what may or may not happen, but at least I can give you some historical facts leading up to today. Back in 2006, the Department of Justice found that .com was found to have market power and so that market power was constrained first by reasonable price of $6 per domain and then some limited ability to increase prices. At that time in 2006, there were only a couple of dozen or less generic TLDs in the marketplace and then of course the country code ccTLDs were also available. During the 2012 renewal by then the price through the increase as it come up to $7.85 and the contract was renewed in 2012. And again in this case the government found that $7.85 was reasonable price although they did remove the automatic price increases, they did not conduct another market study. And so the next renewal for .com comes up in 2018. Now the difference between 2006 and 2012 as compared to 2018, there are couple of interesting things to note about that, the 22 roughly generic TLDs that existed at that time have now grown to over 700 that are available. So the amount of choice available to consumers to choose a TLD test going up dramatically. In addition to that these [new gTLDs] TLDs are selling at an average price roughly three times the prices that .com is selling … of course it’s too early to say what will happen in 2018.” (emphasis added) 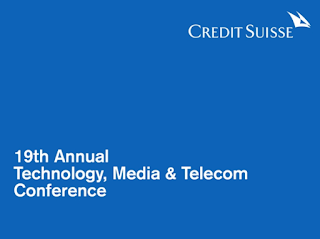 VeriSign, Inc. (“Verisign”), the TLD (top-level domain) Registry operator for .COM and .NET, announced in a Form 8-K filing that Jim Bidzos, Executive Chairman, President and Chief Executive Officer, and George Kilguss III, Senior Vice President and Chief Financial Officer, would speak at the Credit Suisse Technology, Media and Telecom Conference in Scottsdale, Arizona on Tuesday, December 1, 2015, at 1:30 p.m. (MST) which is 3:30 p.m. EST (US). During the discussion, recent company performance and business initiatives will be highlighted.


Listen to the discussion via live audio webcast at https://investor.verisign.com: Verisign Presentation at Credit Suisse Technology, Media and Telecom Conference, Dec 1, 2015, 1:30 PM MT which is 3:30 PM ET (US) - Listen to webcast

A replay of the webcast will also be available at https://investor.verisign.com after the event for a limited period of time.

In connection with this speaking engagement, Verisign provided the following information about the recent increased volume of .COM and .NET domain name registrations during the fourth quarter of 2015:

"As noted on Verisign’s third quarter earnings call on October 22, 2015, there was a higher volume of gross additions, during the third quarter, in international markets, particularly Asia. Verisign discloses the updated domain name base for the .com and .net registries at least daily on its website, https://www.verisign.com/zone. This publicly available information reflects that this increased volume of domain name registrations has continued in October 2015 and in November 2015. As of November 22, 2015 Verisign’s domain name base totaled 139.3 million, up 4.1 million from September 30, 2015. While there continues to be demand for domain names globally, the recent increased volume for Verisign’s top level domains, as well as top level domains of other registries, during the fourth quarter is coming largely through registrars in China. In the past, Verisign has discussed many factors that affect the demand for domain names, including, but not limited to economic, social, and regulatory conditions, Internet adoption, Internet penetration, and increasing e-commerce. In addition to these factors affecting demand, Verisign is also evaluating additional potential factors unique to China that may also be responsible for the recent increased volume of new registrations in China. In no particular order, these potential factors, or combination of factors, could include, but may not be limited to, government initiatives in China to develop their online economy such as ‘Internet Plus*;’ registry and registrar regulatory requirements; cultural influences such as the popularity of numeric domain names; increasing competition amongst Chinese registrars; potential increases in domain name investment activity; and recent capital markets volatility and access to capital in China. Verisign cannot predict if or how long this increased pace of gross additions will continue and we cannot at this time predict what the renewal rate for these domain names will be. Verisign has noted in the past that renewal rates for domain names registered in emerging markets, such as China, have historically been lower than those registered in more developed markets. Verisign will continue to evaluate these and potentially other factors and expects to have additional information related to the domain name base on Verisign’s fourth quarter and full year 2015 earnings call." (source of above: Verisign Form 8-K) (emphasis added)