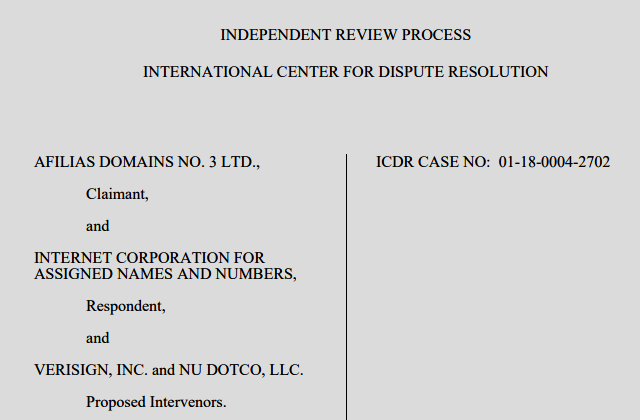 What ICANN disregarded and ignored in developing and implementing its new gTLDs program:

"[W]hen a decision is taken about a possible new top-level domain, ICANN's job is to work out, in a transparent and accountable manner, whether it is really in the best interest of the world as a whole, not just of those launching the new domain."--Sir Tim Berners-Lee at the Net Mundial Conference, April, 2014, in São Paulo, Brazil.

Afilias Domains No. 3 Limited vs ICANN, IRP re .WEB 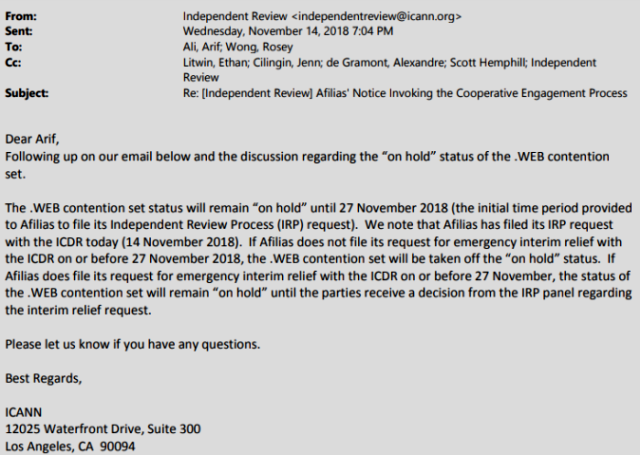 Editor's note and analysis: the critical next step is the IRP emergency panelist's decision on Afilias's interim relief request (see below). If the request for interim relief is denied, ICANN could proceed to delegate .WEB and approve its transfer to Verisign within just a few weeks. Contrary to what has been reported elsewhere, the Afilias request is not a "slam dunk" and could be denied, in which case I would expect ICANN to move swiftly to delegate .WEB, and approve the transfer to Verisign. I understand Verisign is prepared to launch and aggressively market new gTLD .WEB worldwide (a/k/a "awareness campaign"), and I expect there to be some "premium pricing" which would only increase Verisign's margins (profits). There's a play here for domain investors, and for $VRSN investors, and .WEB  might yet be the "top domain story of 2019."

Once .WEB is delegated and launched, ICANN stands to gain immediate financial rewards in the form of .WEB registration and renewal fees, registry fees, and the net auction proceeds of USD $132,099,501.00 (ICANN has already appropriated for itself, inappropirately some say, a share of other new gTLD auction proceeds in order to replenish its "reserve fund" which was depleted in the course of the IANA Transition, including for payments totaling about $15 million for outside counsel legal fees).

ICANN has apparently conducted its own analysis of the claims made by Afilias, and found them without merit. ICANN may also have been influenced by the U.S. Department of Justice Antitrust Division's closing of its investigation of Verisign and .WEB without action, as well as a similar factual situation in the private auction of new gTLD .BLOG to which no one objected, including Afilias. From the standpoint of domain name registrants as well as the entire global internet community, it would be better to have Verisign managing .WEB than Afilias. Verisign is a publicly traded company subject to close scrutiny by various regulatory agencies. Afilias is a privately-held entity with much less accountability and scrutiny.

The hearing on Afilias Request for Interim Measures of Protection is 14 January 2019, 11:00 AM EST:

"2. It did not appear that many of the contention set applicants were willing to pay anything close to that amount at auction for .WEB. At that level, a losing applicant in a private auction would stand to earn more than USD 10 million on their USD 185,000 investment. Most applicants were willing to take that profit. This was, in part, driven by the marketing costs for .WEB, which were projected to be considerable. Given Afilias’ good relationships with leading registrars, we held a considerable advantage over the other members of the contention set, who would need to spend more than we would on marketing.

"3. It appeared that our primary competition for .WEB would be from three other applicants: Web.com Group, Inc.; Ruby Glen, LLC; and DotWeb Inc.

"4. Because Afilias valued .WEB based on its long-term competitive prospects, our valuation was materially different from most of the other .WEB applicants.

"For these reasons, we were confident that no other member of the .WEB contention set would outbid Afilias at auction."

". . . . 23 ... My contact at the private auction house told me that they had received signed applications for everyone except for NDC [Nu Dot Co LLC]. My contact further stated that they had tried to contact NDC about the outstanding agreement without success.

"24. On 1 June 2016, I sent a text to Rasco about the outstanding agreement. Rasco replied that NDC’s Board had instructed him to not participate in the June private auction, but to proceed to the July ICANN auction.

"25. NDC’s position made no sense to me ..."  [Editor's note: honestly, someone should make a movie about all of this, a comedy or drama, the Miami angle (Nu Dot Co's principals) makes it all come "alive."]

"... 25. Based on Afilias’ longstanding strategic goal to obtain .WEB to compete against VeriSign, Afilias was prepared to outbid all of the other applicants at the private auction. In preparation for the auction, Afilias had acquired sufficient financing to bid more than three times the record bid of an ICANN Auction at the time.

"26. Given the incentives inherent in a private auction, as opposed to an ICANN Auction, NDC was potentially sacrificing millions of dollars by insisting on an ICANN Auction. Its decision to withdraw from the private auction therefore made little sense to me, especially as I considered it highly unlikely that NDC had a war chest of the size that would allow it to bid higher than what we could bid ..."

"21. ... VeriSign continues to dominate registrations of generic domain names. Consumers still flock to .COM, which continues to grow despite the introduction of new gTLDs and the increasing lack of attractive short .COM domain names. .NET, the second largest gTLD and also controlled by VeriSign, is only 11% of .COM' s size. Collectively, .COM and .NET account for more than 78% of all generic domain name registrations.

" ... 25. .WEB is largely considered to be the only new gTLD that can possibly compete with .COM .. WEB has the capability to compete with both .COM and .NET for new registrations, which will, over time, I believe, erode VeriSign' s market position.

"... 39. In my view, NDC and VeriSign conspired to subvert the rules, policies, and principles that underlie ICANN's New gTLD Program .... 43. To-date, however, ICANN has done nothing to address these violations. Instead, ICANN is proceeding toward the delegation of . WEB to NDC-and therefore to VeriSign-as though none of this history and none of these events had ever taken place ...."

Editor's final note: Privately held Afilias, is the world's second largest registry operator. Afilias was founded in October 2000, by a group of 19 major domain name registrars, with headquarters in Dublin, Ireland. According to IrishTimes.com, Afilias "was the first known company to relocate to the US on the back of 'favourable' tax changes introduced by US President Donald Trump last December [2017]." Headquarters are now in Horsham, Pennsylvania, a suburb of Philadelphia.

This IRP filed by Afilias could be just the first in a series of legal maneuvers, including the possibility of one or more private antitrust actions under U.S. law, which are not barred nor affected by the U.S. Department of Justice Antitrust Division' closing its investigation of Verisign and .WEB, without action as disclosed by Verisign in January, 2018. Afilias Domains No. 3 Limited, an Irish legal entity, could also resort to EU Competition law or authorities. The outcome of the hearing on January 14, 2019, could be interesting.

Editor's note: I have not yet finished my comment to the EPDP Initial Report for reasons I will explain in next week's News Review. Anyone may submit their own comment by December 21, 2018.

Editor's note: .int and .arpa are two legacy top-level domains (TLDs) administered by ICANN and/or its affiliate PTI, (.arpa is technically "managed" by the Internet Architecture Board (IAB) (see RFC 3172) which is "a committee of the Internet Engineering Task Force (IETF) whose parent organization is the Internet Society (ISOC).

It is way past time for ICANN and/or its affiliate PTI, to completely divest themselves from both TLDs .int and .arpa, both of which pre-date ICANN. IAB, IETF, or ISOC are more than capable of managing and administering the TLD .arpa. The ITU (itu.int) or other designate of the UN, or its Secretary-General, is more than capable of managing and administering the TLD .int  which is reserved for use by intergovernmental organizations that meet the requirements found in RFC 1591. "In brief, the .int domain is used for registering organizations established by international treaties between or among national governments. Only one registration is allowed for each organization. There is no fee for registering an .int domain name."--iana.org.

Similarly, ICANN should also be required to divest itself from management of the "L" root servers, which could be capably managed either by an affiliate (IETF, IAB, etc.) of the Internet Society (which is funded by .ORG operations), or the ITU or another affiliate of the UN (or UN Secretary-General).

a. Internet Users: Brazil has more internet users than Germany and the UK combined. The numbers: 149 million versus 79 million/63 million. Indonesia has 143 million internet users, more than twice those in France (60 million).--datatrekresearch.com.

b. Building a More Resilient Internet--the U.S. Departments of Commerce and Homeland Security have developed a road map (pdf), that charts a path forward, setting out steps to stop the cyber threat to our internet infrastructure. It outlines a plan for coordination among government, civil society, technologists, academics, and industry sectors to develop a comprehensive strategy for fighting these threats.

3. How Big Data Is Transforming the NBA (video)