EPDP Meeting May 2, 2019, Notes and Action Items: Questions for ICANN Org: "Is there an attorney-client relationship between ICANN Org and Bird & Bird? "

Answer May 23, 2019 from ICANN Org: "In light of your recent question, “Is there an attorney-client relationship between ICANN Org and Bird & Bird,” and related communications on the EPDP Team list, we wanted to provide this background. ICANN org retained the law firm of Bird & Bird as an additional expert to help advise on GDPR matters, including advising the EPDP Team. There is an attorney-client relationship between ICANN org and Bird & Bird. In connection with this engagement, Bird & Bird is providing analysis on issues related to the EPDP’s work that is being shared with the EPDP Team. In announcing this engagement to the EPDP [Legal] Team, ICANN org noted that ICANN has used the services of Bird & Bird in the past in a similar engagement, in providing public advice to the community Thick WHOIS Implementation Review Team. Given the positive experience with working with Bird & Bird on that public advice, Bird & Bird’s understanding of ICANN and its ecosystem, as well as its deep expertise in international privacy and data protection matters, ICANN org determined that the Bird & Bird team could help provide additional expertise to advance the efforts of ICANN org and the GNSO Expedited PDP Team. Members of the EPDP Team’s legal committee proposed using the same independent outside counsel for both the EPDP Team and ICANN Org. To that end, in the “Considerations for Procurement of Legal Services” document compiled by Kurt Pritz, the Phase 1 Chair [Editor's note: Kurt Pritz is ICANN's 'King' of secret undisclosed conflicts of interest], which incorporated the Statement of Work [pdf, highlighting and bold added] written by Stephanie Perrin and Diane Plaut, as well as a note on Conflict (by Margie Milam), and on possible efficiencies by Thomas Rickert, it was noted that the same outside counsel could be used for both the EPDP Team and ICANN org. The notes to ICANN included in the “Considerations” document stated that it was the EPDP Team’s belief that both ICANN org and the EPDP Team would require answers to the same or similar questions and that, therefore, reaching out to one firm might avoid duplicate costs and also potentially conflicting advice. I hope that this background is helpful. Please let us know if you have further questions or wish to discuss this topic further."--ICANN Org liaisons Trang Nguyen and Dan Halloran. (emphasis. link, and [notes], added)

Excerpt from that Kurt Pritz email of Jan 7, 2019 to Dan Halloran (ICANN legal) referenced above:


"... To the Legal Team, I apologize that this document does not encompass all the thought that has gone into this effort or did not consult with you on this document but I wanted to get something to ICANN to expedite the procurement."

Editor's note: this is another example of the dysfunctional EPDP Phase 1 chaired by Kurt Pritz, as enabled by GNSO Council and ICANN Org, now bogging down Phase 2, as indicated herein, and here and here.

Excerpt from the aforesaid Statement of Work:


"Thanks for this explanation Marika [email above from ICANN Org liaisons Trang Nguyen and Dan Halloran]. What is the precise date of the previous engagement with Bird and Bird re Thick transition?  I would point out that while you put my name first, I was not the principal penholder on that document [Statement of Work (SOW)], Diane [Plaut] did all the heavy lifting. I think a few learnings discussed prior to jumping into phase 2 might be helpful here.  Some have been addressed already no doubt, but forgive me for repeating them in this roundup:


1.  We have asked some remarkably basic questions in the past. (e.g. to Chris Kuner in the RDS group days).  This is a waste of money in my view.  We need to focus on good questions.  The legal subcommittee is helpful in weeding these unfortunate questions out, but the committee as a whole need to also vet the questions.

2.  We need to watch very carefully for hidden policy decisions/assumptions, both in the legal questions we ask, and in the technical approaches we assume we are taking, that are in fact resting on policy decisions/assumptions that have not been approved by the GNSO Council.  In my opinion, a test should be applied as we go through our work to help discern these buried assumptions. Should not be hard to develop this, and would prevent us having to constantly rehash things.


"I have been reviewing the legal subcommittee's mailing list in order to better understand how this situation has arisen, and I came across [this email](https://mm.icann.org/pipermail/gnso-epdp-legal/2019-January/000012.html) from the previous Chair (emphasis added): "To keep the ball rolling on the procurement of legal services, I am attaching a document to aid in the effort. ... To the Legal Team, I apologize that this document does not encompass all the thought that has gone into this effort or did not consult with you on this document but I wanted to get something to ICANN to expedite the procurement."

"Given the situation we find ourselves in now, I am hoping someone may be able to clarify what input from the legal subcommittee on the matter of legal services procurement was not taken forward. I am quite out of the loop as to how the legal subcommittee interacts with outside counsel, and so I am hoping someone can also clarify for me what interactions the subcommittee has (if any) with Bird and Bird directly? I imagine it would be helpful and most efficient for there to be a continuous, factual dialogue between the subcommittee (as client) and Bird and Bird (as attorneys). I'm not sure that's happening, or can happen, if the client is instead ICANN org. We might want to consider what a better mechanism may be to facilitate factual dialogue between the subcommittee and Bird and Bird moving forward. And I really want to emphasize that this should be factual dialogue so that all the facts are on the table, and not an opportunity for any stakeholders to attempt to persuade external counsel to take a particular position." (emphasis added)


"... Editor's note: the most recent Bird & Bird memo dated 8 Mar 2019 "Advice on the legal basis for transferring Thick WHOIS" is indicative of the problems in having the EPDP team use ICANN Org's counsel (Bird & Bird) for legal advice. This March 8th memo is troublesome, in part, because it appears to approach its analysis cognizant of ICANN Org's known preference for a thick Whois model, and states one or more substantive factual errors ...."

EPDP Meeting May 30, at 14:00 UTC (agenda, etc., here), audiocast (in browser). Notes and action items from May 23, 2019, meeting. EPDP meeting recordings and transcripts (when available) are posted on the GNSO calendar. EPDP Links: wiki, public mail list, GNSO mail list, and worksheets. Editor's note: the audiocast was not working after approximately the first hour of the meeting. Observers can review the transcript next week and view the Zoom video (when available links will be on GNSO calendar). May 30 meeting notes and action items will be posted at some point after the meeting.


".... In the year since it went into effect, GDPR has been an important catalyst for progress in privacy protection. Countries around the world have implemented new laws that reflect the new understanding people have for privacy in our digital era. Some companies are doing a better job of handling sensitive personal data and they have delivered new tools that make it easier for people to manage and control their personal information. Now it is time for Congress to take inspiration from the rest of the world and enact federal legislation that extends the privacy protections in GDPR to citizens in the United States."

Funds under management (p.72 of 75) in millions USD, unaudited: 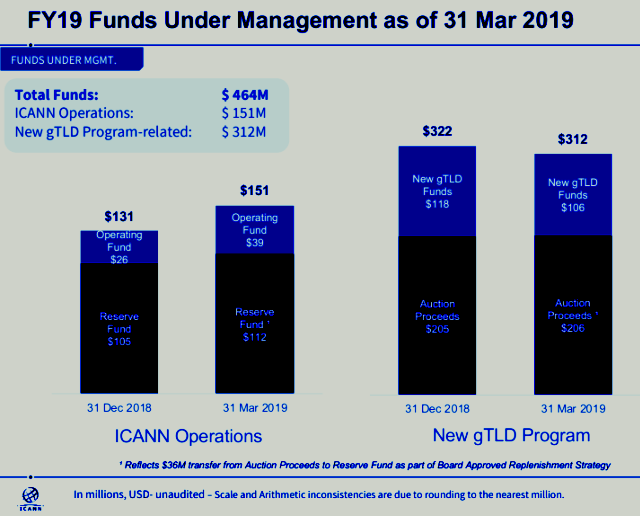 b. .AMAZON Call to Action:

ICANN’s final decision is a disappointment for ACTO, the coalition of South American countries which had rejected what it called “the monopoly of one company” and the “appropriation” of the “geographical names of the states, without their due consent,” arguing the nations had a right to participate in the domain’s governance. The Ecuadorean ambassador to the US wrote to ICANN's GAC Chair in March (pdf), saying the coalition was “not looking for financial compensation,” but that the matter was one of “sovereignty.” See also Amazon wins domain name dispute with Latin American governments--ft.com, and Retailer Amazon nears victory in rainforest battle over domain name--reuters.com: "Amazon basin countries Brazil, Bolivia, Peru, Ecuador, Colombia, Venezuela, Guyana and Suriname have argued that it ["Amazon"] refers to their geographic region and should not be the monopoly of one company" (emphasis added).

Editor's note: In addition, the .AMAZON applications now violate Specification 13 and ICANN is in violation of its Articles and Bylaws by failing to properly publish for public comment the recent PICs proposed by applicant Amazon EU S.à r.l:

FastCompany.com: "Now’s your chance to tell ICANN how you feel about Amazon’s domain battle with the rain forest"--excerpt below from comments being filed at ICANN: 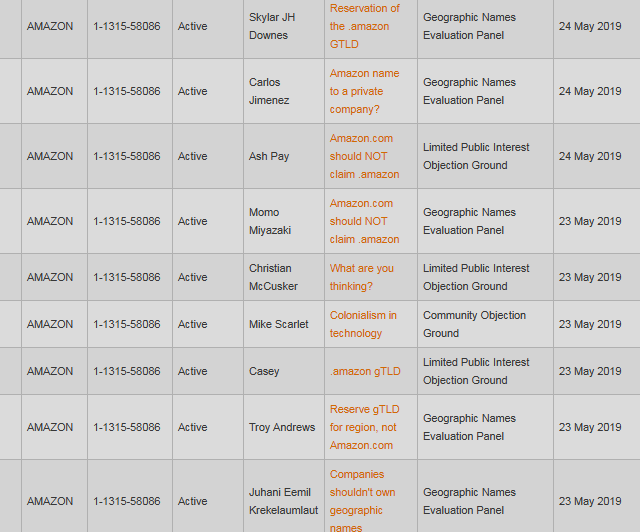 Editor's note: and then we have this written by a former ICANN Board member who doesn't even know what the acronym 'ICANN' stands for.  As I've said before [2) .AMAZON], the .BRAND new gTLD program was a MISTAKE from the beginning, a CORRUPTION of "the concept of generic top-level domains (gTLDs) as set forth in RFC 1591 written by Jon Postel, which predates the formation of ICANN and its "Californication" of the internet and global DNS. I'm with the South American countries. ICANN should do the "right thing" for once and end the .BRAND gTLD program, refund the application fees, and "undelegate" all .BRAND gTLDs from the internet "root," while allowing every owner of a distinctive trademark to block use of that mark as a gTLD in the future. End the ICANN extortion racket -- see .PING testimony."

"A "brand" or "trademark" is neither a "monopoly" nor "generic." ICANN's .BRAND new gTLDs program is both ill-conceived and corrupt."

See also Amazon Is Flooding D.C. With Money and Muscle: The Influence Game--bloomberg.com. Amazon.com, Inc., lobbied “more government entities than any other tech company in 2018 ... Over the last six years, Amazon has increased lobbying spending by about 460%."

b. Verisign $VRSN Registry Operator of .COM
Tracking Warren Buffett's Berkshire Hathaway Portfolio's $VRSN Holdings Q1 2019 Update--Berkshire's $VRSN shares were first purchased in Q4 2012 at prices between $34 and $49.50. The position was more than doubled in Q1 2013 at prices between $38 and $48. The buying continued till Q2 2014 at prices up to $63. The stock currently trades at ~$198, and the Berkshire position comprises 1.18%  of the Berkshire portfolio and about 10% of all Verisign shares.

c. Tucows $TCX Q1 2019: Management posted responses to follow-up questions on the Tucows  investor relations website, on Tuesday, May 21, 2019. The Q&A is available as an audio file or transcript. Excerpt re: acquisition of registrar ascio.com -- "Ascio contributes a little under $4 million in cash EBITDA on a run rate basis, and in addition, will provide synergies of a little over $1 million, through the next 12 to 18 months, from replacing overhead costs of the previous owners on a more cost effective basis, and being able to apply some of the talent in the Copenhagen office more broadly over the entire wholesale business." Editor's note: $TCX was recently upgraded to Buy from Hold at Echelon.

DNS Hijacking: What Is It and How Does It Work Anyway?--securityboulevard.com.

How (and Why) to Change Your DNS Server--the Domain Name System (DNS) is an essential part of internet communications. Upgrading to a better DNS server can make your surfing both faster and more secure.--pcmag.com.