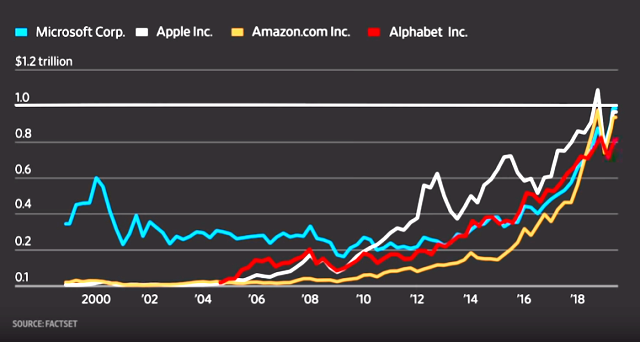 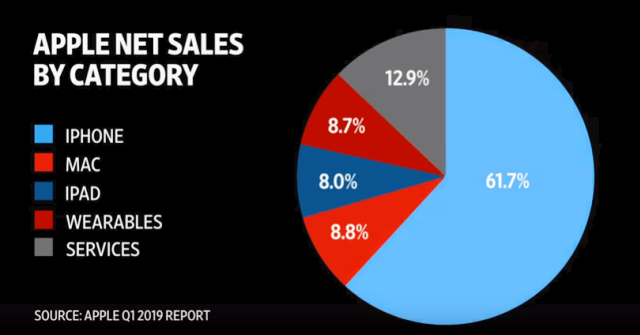 2) 5G Hype: 5G discussions are complex, convoluted, no one really knows what's happening:
5G still has a long way to go and can't scale. The 5G network relies on mmWaves, whereas 4G LTE uses MHz.  T-Mobile's CTO Neville Ray: "Millimeter wave (mmWave) spectrum has great potential in terms of speed and capacity, but it doesn’t travel far from the cell site and doesn’t penetrate materials at all. It will never materially scale beyond small pockets of 5G hotspots in dense urban environments."

Warren Buffett calls the U.S. stock market “ridiculously cheap” (if interest rates stay at these low levels)--"Fed Model" indicates U.S. stocks are "cheap" relative to U.S. Treasury bonds--here’s the math: The spread between the S&P 500’s earnings yield -- a proxy for how much equities “pay” shareholders -- and the 10-year Treasury yield currently sits at 2.9 percentage points. (The wider it is, the cheaper are stocks.) While that difference began to expand significantly in December of last year and has come in a bit since, strip out the last five months and the relative payout of stocks over bonds is the highest since 2016. Also note Buffett's most recent annual letter (pdf):


“the annual change in Berkshire’s book value – which makes its farewell appearance on page 2 – is a metric that has lost the relevance it once had.”

Europe: the Unbreakable, Unsustainable Eurozone--when the downturn happens, as it eventually will, the unsustainable will hit the unbreakable--ft.com. The EU sits between a rock and a hard place--politically unsustainable--fnlondon.com. Maybe Europe Can’t Recover From the Financial Crisis--The European Union’s flaws, cultural fragmentation and falling birth rates look like a formula for decline and there are number of signs that this pessimistic scenario will come to pass--Noah Smith in bloomberg.com. How Russia contaminated $2.7 billion of oil exports to Europe--contaminated oil found in Belarus, Poland, Germany, Ukraine and the Baltic port of Ust Luga, Druzhba network.

Someone Tell Theresa May and Parliament--“The Brexit horse has bolted”--UK banks told Reuters they would not reverse changes already made in preparation for Brexit, even if it was scrapped in a second referendum, nor would they financially support any future “Remain” or “Leave” campaigns. The banks have already transferred some client assets to new European Union legal entities, and moved about 2,000 jobs from London to offices in Dublin, Paris, Frankfurt and Madrid, thereby reducing costs of doing business in expensive London, and 'enhancing' the appeal of British banks to EU clients outside the UK. Instead, the bankers indicated they would continue to focus on future-proofing their businesses, updating technology, and expanding into new markets.

China VC: Sequoia Capital China, a widely viewed bellwether for Chinese tech investment, reportedly will lay off as much as 20 percent of its investment staff due to the slowdown in China's  tech sector.


"We make up stories in our minds and then against all evidence, defend them tooth and nail. Understanding why we do this is the key to discovering truth and making wiser decisions"--fs.blog

Google: transparency, choice and control in digital advertising--new protections and controls in Chrome--blog.google.

Amazon's new Blink XT2 smart camera cheaper than the original. Also: Why Amazon (video) is gobbling up failed malls in the U.S.

YouTube says it will make all of its original content free this fall, a strategy that its CBO says is in opposition to what other media companies are doing--Variety.com.

Qualcomm's Modems Are Faster And Better--seekingalpha.com. See also Intel's failure in 5G smartphone modems was just another point in a string of failures that will cost the company around $3 billion in revenues starting in 2020 ... "Avoid the stock as 2020 revenue estimates of $72 billion need to be cut"--seekingalpha.com.

Dutch company ASML Granted Final Judgment by US Court Against XTAL for theft of trade secrets - $845 Million Awarded Will Be Uncollectible, But ASML Will Own XTAL IP--asml.com.

EU's Tusk warns of risks in rise of U.S. tech giants Google, Apple, Facebook, and Amazon: the European Union has been a leader in controlling how social media handle users' personal data, with rules known as GDPR introduced in May, 2018, giving regulators the power to impose fines of up to 4% of global revenues for violations.

Newspapers dying--for every reporter now, there are six PR workers, the US Census reports, and the number of PR flacks will continue rising, says Labor Department--bloomberg.com.

Personal tech: Google Pixel 3a: The $399 'Game Changing' Smartphone. Google also announced that this year and forward, all new Chromebook devices will be Linux ready--zdnet.com.