You have to hand it to those CCWG guys--Mathieu, Thomas and Leon--they re-started the Steamroller that Thomas Rickert had test driven in LA, and look at what was accomplished in just a few hours at ICANN 54 today--after realizing the proposed 'Single Member Model' was DOA Dublin--the CCWG is now well on its way to: 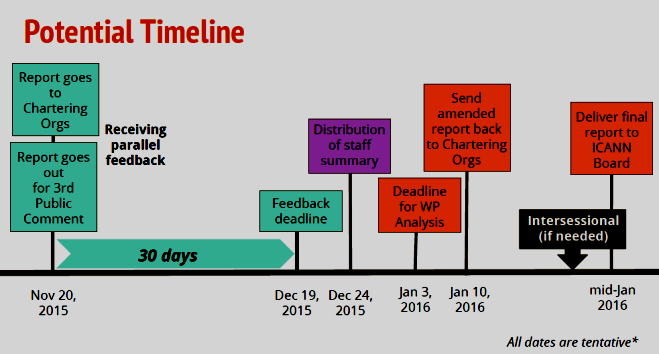 In order to accelerate the process, the timeline provides for "parallel" feedback from the ICANN Chartering Organizations (a/k/a Chattering Organizations) at the same time as the Report goes out for 3rd Public Comment. As commented by two people active in CCWG-accountability's work near the end of today's session:
We have a habit of fantasy timelines in this group...
We have a habit of wasting time and turning those fantasy timeline predictions into self fulfilling predictions.

Video, audio, and transcript of today's CCWG-Accountability's session will be posted here.

UPDATE: At the ICANN 54 Public Forum on October 22, 2015, Leon Sanchez, Co-chair reported a summary of key decisions and agreed-upon next steps: