UPDATE: Rightside Group's (NAME) CEO Taryn Naidu on Q4 2015 Results - Earnings Call Transcript | Seeking Alpha: Sameet Sinha of B. Riley:"...  looking at your guidance, I mean, you're kind of implying basically mid-point of next year's guidance will be half of what you grew in '15. So what do you think is causing that slowdown, I mean obviously seeing the registrar, the wholesale business is slowing down, registry is at least below our expectations, anything, any specific trend that you wanted to call out or anything that we should be cognizant of?"
Taryn Naidu, Rightside CEO: "Well, we're going to continue to drive and invest in our strategic initiatives. I think the retail and registry business continue to grow for us and we're happy with that. We're going to drive double EBITDA at the mid-point of the guidance. And, yes, the wholesale business and the wholesale industry as a whole has been challenged on the growth perspective which is why we are going to go to the price optimizations and the cost efficiency there." (emphasis added) 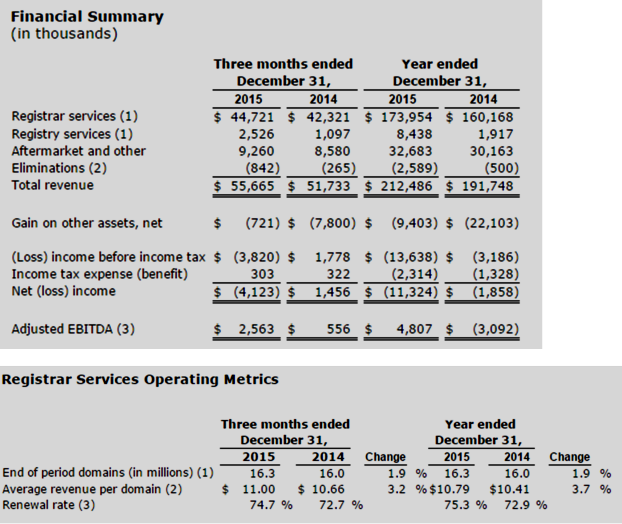 According to ntldstats.com, Rightside is the 9th largest new gTLD registry operator with 3.45% market share although it operates 4.39% (40) of all new gTLDs. For details of Rightside's new gTLDs, including number of domain name registrations per new gTLD, go here.

In addition to being a new gTLD registry operator (Rightside Registry), Rightside operates other brands in the domain name industry, including eNom, Name.com, and NameJet. Headquartered in Kirkland, WA, Rightside has offices in North America, Europe, and Australia. For more information: www.rightside.co.