Domain Mondo's review of the past week and look ahead [pdf]:

• While the BIG news this week may have been the 'baked-in-the-cake' report from NTIA, and Capitol Hill's reaction, you may have missed two revealing comments made by a former ICANN staff member and a former ICANN Chairman:


"The endemic problems at ICANN, which are most strongly reflected in its staff and board's intransigence, have also started spreading to the broader ICANN community – a community that is increasingly reliant on the organization's financial support. Over the course of the IANA transition plan's development, that community settled for untested convoluted decision-making processes over solid reform."--Kieren McCarthy, former ICANN staff member, writing in TheRegister.co.uk (emphasis added)

"If I have any trepidation about the proposal it is associated with its general complexity. As the former chairman of ICANN, I am no stranger to the evolution of ICANN's structure and processes and their relative intricacy. The new proposal adds its own unique aspects to this tendency and it remains to be seen how well the system will work."--Vint Cerf, Vice President and Chief Internet Evangelist at Google, and former ICANN Board Chairman (2000-2007), ACM.org (emphasis added)

• ICANN released (pdf) this week to the Cross-Community Working Groups, the IANA Stewardship Transition costs incurred at ICANN (including CCWG-Accountability and CWG-Stewardship) from inception on 1 July 2014 to 31 March 2016. Amounts in chart below are in USD thousands (000's):

As expected, law firms took almost half of all the spending. While ICANN is required by U.S. law to disclose what it spends lobbying the U.S. government, it is not required to disclose (and doesn't) what it spends "lobbying" foreign governments, and other "influential" persons and entities. Note however, ICANN has spent heavily in support of 'initiatives' outside its scope and mission, not included in the above amounts.

With CCWG-Accountability Work Stream 2 just now getting underway, and not expected to finish until a year from now, final costs will not be known until sometime next year. If it turns out that the untested, unproven proposals to make ICANN accountable fail, and the world gives up on ICANN, it will have all been in vain.

• Also worth noting: as a follow-up to the foreign "lobbying" reference above, ICANN, its directors, officers, and employees, are all subject to the Foreign Corrupt Practices Act (FCPA) (15 U.S.C. § 78dd-1, et seq.), penalties of which include prison terms of up to 5 years. Since ICANN refuses to disclose foreign lobbying expenses and other influence-peddling expenses outside the U.S., anyone (inside or outside of ICANN), with knowledge of possible violations (past, present, or future) of the Foreign Corrupt Practices Act, should contact the U.S. Department of Justice directly: Report a FCPA Violation via email to FCPA.Fraud@usdoj.gov or via fax 202-514-7021.


"“Capture” Through Corruption. Recent events have shown that international organizations ... can be “captured” through corruption. Leading officials of such organizations have pleaded guilty to (or have been indicted for) accepting bribes ... Correspondingly, it is at least imaginable that a government or a private actor could bribe the board of ICANN to vote the way it wishes on some hypothetical critical decision."

Or even bribe an ICANN employee for 'insider information' or for 'favorable treatment' on a pending issue. We already know about the revolving door at ICANN and how it corrupts ICANN decision-making. We also already know of at least one high-ranking ICANN officer, who after resigning due to an undisclosed "conflict of interest," went on to serve as Executive Director of the leading new gTLDs domain name industry association, of which former ICANN President and CEO Fadi Chehade admitted: "... this idea of the DNA Association started in some small meetings we were having at the ICANN office where I was a huge early supporter ..."  Wouldn't you like to know of all the 'small meetings' at ICANN offices where things are discussed and decided in secret? Among the many things missed by the ICANN Cross-Community Working Groups involved with the IANA transition and ICANN accountability, is the failure of the ICANN Board and ICANN management to have, and enforce, a corporate-wide conflicts of interest and code of ethics or code of conduct policy, applicable to every ICANN employee, not just Board members, officers and a few "key employees."

• Question of the Week:

As noted by @MiltonMueller there is a glaring delay on the IANA transition tentative timeline: 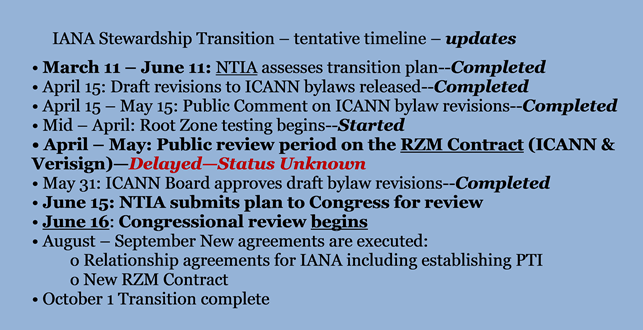 The above chart was derived from Congressional testimony on March 17, and the last we heard from ICANN was May 10th: "Root Zone Maintainer Agreement (RZMA) Status update: Discussions between ICANN and Verisign to finalize details of the RZMA are continuing. The two parties have coalesced around many key elements of the agreement and hope to have a final draft by the end of the month. Once the draft RZMA is finalized it will be made publicly available on icann.org."

The "end of the month" has "come and gone" and now more than a month has passed since the last update, and nothing but silence from ICANN to the global multistakeholder community. Verisign was requesting a 10 year extension of its dot COM registry agreement to run coincident with its new 10-year Root Zone Maintainer Agreement. On April 28, 2016, Verisign's Chairman reported "ICANN and VeriSign are in the final stages of preparing the Root Zone Maintainer Agreement and the .COM Registry Agreement extension documents. We continue to make progress and we'll provide periodic updates as appropriate on our progress towards these objectives."  If there has been a breakdown in negotiations, no one is talking.


"... we are starting to see more frequent changes to registry pricing and premium name policies, which could possibly affect renewal pricing in the future. One particular situation that created a bit of commotion in the RrSG [Registrar Stakeholder Group] this year was the prospective RRA [Registry-Registrar Agreement] changes brought forth by Vox Populi, the Registry Operator behind .SUCKS. The two problematic changes suggested were to allow the registry the right to amend any and all terms of the RRA with only a 15 day notice to registrars and added language that possibly would haveprevented registrars from voicing their opinion about the .SUCKS extension to potential registrants. The RrSG responded to these alterations by officially objecting to ICANN; an action that eventually resulted in the registry modifying the changes to incorporate more favorable language for registrars. Undoubtedly, we will continue to see many more Registry Operators come forth with changes to policies and agreements over the rest of this year ..."--Mark Monitor New gTLD Quarterly Report Q2 2016 (emphasis added)

• Innovation? That same Mark Monitor report cited above, also discloses "the most frequently registered label [second level] in the [new gTLD] .Brand space is HOME; e.g. HOME.BARCLAYS" but 55% of "home.brand" domain names resolve to a .COM domain name, while 18% are an "inactive page," and only 23% resolve to home.brand content page.

Inescapable conclusion: .BRAND new gTLDs are mostly defensive for trademark and branding purposes, but ICANN (at $185,000 + $25,000 annually for each .BRAND new gTLD) is making out like a bandit (while also giving a boost to the registry services industry, the back end operators of each top-level domain or TLD.) It's the kind of shakedown Michael Corleone would have loved.


The general trend of redirecting .Brand domains to existing content on legacy gTLDs (.COM) or ccTLDs continues. We’re also seeing more .Brand domains resolving to content by framing, or displaying, content from other sites. While the user experience with framing may be better than a redirect because the .Brand domain remains visible in the address bar, the practice [framing] doesn’t score well with search engines. Search engines view duplicate content as lower quality and therefore the domain won’t rank as well as the domain with the original unframed content.

•  If you're 'selling' dot COM domains to Chinese buyers, read this post by someone who really knows and understands the Chinese market: Finding Chinese companies for your .com name | coreile.com: "... We know .com is king in China and therefore is frequently the target of domain upgrade by Chinese companies ..."

•  ICANN has announced "the implementation of amendments to the [Domain Name] Transfer Policy and the Transfer Dispute Resolution Policy (TDRP). The amended Transfer Policy is applicable to all gTLD names and ICANN-accredited registrars. The amended TDRP is applicable to all gTLD names, ICANN-accredited registrars, and registries. These new requirements will take effect and will be enforced by ICANN beginning on 1 December 2016."


•  What would an ICANN meeting look like if no one was getting their expenses paid by ICANN to be there? Report on Public Comments on Draft FY17 Operating Plan and Budget and Five-Year Operating Plan Update Now Available - ICANN: "The budget is scheduled for adoption when the ICANN Board meets during ICANN56 in Helsinki." Read how ICANN responded to a comment requesting "more travel support" (ICANN's junkets and codependent stakeholders' culture is fed by ICANN paying for an increasing number of stakeholders' travel, accommodations, and per diem expenses, to each ICANN meeting):


"Since the ICANN 33 meeting in Cairo, supported travelers per ICANN meeting have increased over 325% and out of pocket travel costs have increased 250% ... during that time the organization has not examined those increases in a structured way. In view of the expansion of travel support for the last several years and expected changes prompted by the potential IANA Stewardship Transition implementation, the organization intends - in partnership with the community - to conduct a thorough examination of community supported travel in FY17 so that more strategic consideration can be given to levels of travel support among all community activities and groups across the organization."

•  No issues open for comments close this coming week at ICANN.

•  Internet Governance Forum (IGF) news: IGF Retreat 2016 Call for Written Inputs: "All stakeholders are invited to send written inputs commenting on issues that will be discussed" at the IGF Retreat (July 14-16, 2016). The guiding questions (based on the the draft agenda) may be reviewed, and responded to, here. The deadline for responding is July 1.

•  Five most popular posts (# of pageviews Sun-Sat) this week on DomainMondo.com:
• Other Reading Recommendations: