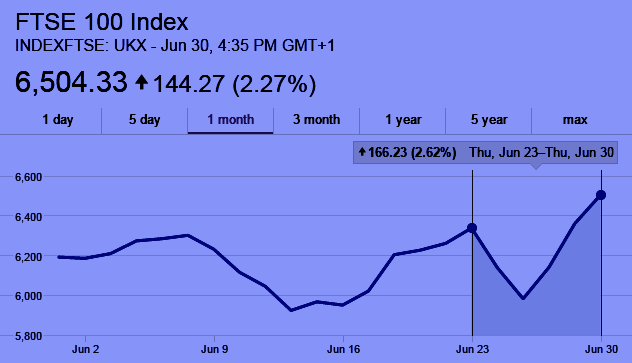 UPDATE June 29, 2016: Contrary to the "Chicken Little" reports from the media and establishment, the FTSE100, the benchmark index of the 100 largest companies listed on the London Stock Exchange (as measured by market capitalization) has completely recovered and is now higher than before the Brexit vote:
UPDATE June 26, 2016: Contrary to media reports following the Brexit vote, Reuters reports polling indicates Scots do not favor another referendum on separating from the UK. See also News Review: Brexit ... | DomainMondo.com (June 26, 2016):


"There is a lot more to come in this drama beyond just the voting results. It is now clear that Boris Johnson and David Cameron are "on the same page" and there will be no immediate trigger of Article 50. Instead, the clever British intend to use the leverage of their voter mandate to squeeze the EU aristocracy for concessions that will give the UK almost everything it wants, and a status no other country, in or out of the EU, now has."

Video above: Boris Johnson said Friday the UK vote to leave the EU gives Britons a 'glorious opportunity' to take control over its own taxes and borders. All UK politicians 'should thank British people' who 'did their job' dealing with one of the toughest questions of all time. The EU "was a noble idea for its time; it is no longer right for this country" said Johnson. Published June 24, 2016.

Brexit fallout? Britain will be fine, but the EU may have reason to worry:


Ignore the noise, distraction, and hysterics of headlines and cable news. Here's a snapshot of what really happened the day after the Brexit vote:

Below is an email sent Friday (June 24, 2016) by the CEO of a major global company headquartered in London to all employees following the EU referendum vote in the UK on Thursday to withdraw from the European Union:


Dear Colleagues, I am writing to share some immediate thoughts in the light of the UK’s vote to leave the European Union. These are clearly uncertain times for the UK and for Europe. _____’s view throughout the campaign was that the UK was better off within the EU. Of course we fully respect the democratic decision that has been taken and, for _____, we will now focus on forging a successful path in a new context. _____ is in a strong position. More than half of our revenues are from the US, in dollars. We have a solid balance sheet with low debt, and this will enable us to weather uncertainties. Although we care deeply about the UK, we are the world’s _____ company. We will continue to be advocates for a world that is more open and connected. It is vital that the UK’s world class universities should continue to attract the brightest young people from around the world to enrich our _____ community. For now, the important thing for us all is to stay focused on our business and our customers. We will take our time and work through every implication of our business and our growth. We will also will play our part in helping maintain the outward-looking United Kingdom and globally connected _____ community that are in the interests of us all. (emphasis added)

Markets' reactions (from Thursday close to Friday close--see charts below):
FTSE100 (UK): -2.71%
SP500 (US): -3.58%
DAX (Germany): -6.69%
CAC40 (France): -7.85%
Clearly, the French and German markets took a much harder tumble, while the markets in London showed resilience and recovery by the end of the market close on Friday. Investors have reason to worry about the European Union (EU). The EU has a lot of problems that will only be worse without the UK--problems that are not going to go away--long-term economic decline, aging populations, fiscal and monetary issues and economic imbalances caused by the single currency (euro), and a continuing refugee crisis. Is it any wonder that Switzerland formally withdrew its long-dormant application to become a member of the EU last week? Haughty Eurocrats may regret their undermining David Cameron's campaign to "Remain."

Much is yet to be done, and as economist Martin Wolf says in the video below, Britain, the world's 5th biggest economy, is the most important market for the Eurozone. As for Wolf's reference to the "consequences of uncertainty," remember what Warren Buffett says:

Note accordingly, Martin Wolf's reference to investors snatching up assets in the UK: