Netflix reported Monday its Q3 2016 results, with numbers showing a spike in new members amid rising concerns about the impact of earlier price increases. WSJ.com's Lee Hawkins explains in the video above published by WSJ.com on Oct 17, 2016. 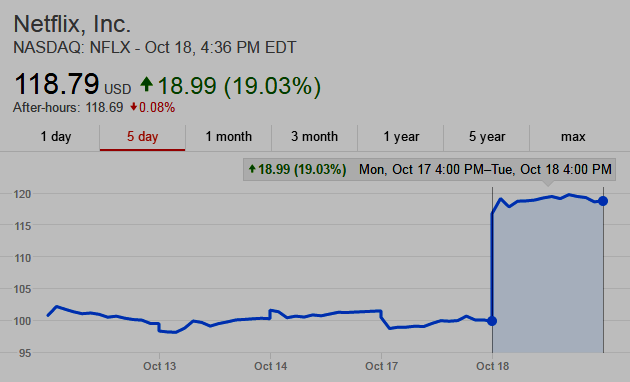 Global streaming revenue totaled $2.2 billion, of which 40% was generated abroad. Operating income amounted to $106 million (compared with our $64 million estimate) while net income was $52 million (vs. forecast of $22 million). In Q3, we added 0.4 million members in the US vs. our forecast of 0.3 million and 3.2 million members internationally vs. our forecast of 2.0 million. Our over-performance against forecast (86.7m total streaming members vs. forecast of 85.5m) was driven primarily by stronger than expected acquisition due to excitement around Netflix original content …. For Q4, we forecast 5.2 million global net adds, with 1.45 million net adds in the US and 3.75 million new members internationally. Our expectation for a moderate year-over-year decline in net adds reflects the completion of un-grandfathering. We are pleased with the results thus far as we expect ASP to grow 12% from Q1’16 to Q4’16. Internationally, the initial demand from our launch in Spain, Portugal and Italy in Q4’15 will also affect our year-over-year net adds comparison. We will face a tough international net adds comparison in Q1’17 because of the initial membership surge in Q1’16 tied to the launch of 130 additional territories. As discussed, for the balance of 2016, we will continue to operate around break even, and then start generating material global profits in 2017 and beyond, by marching up operating margins steadily for many years.