"In sum, government officials in many countries around the world appear increasingly comfortable blocking access to online services and apps, despite the significant economic and social damage that internet service disruptions bring to their countries. Whether their ostensible motivations are public security or political self-preservation, government officials should understand the wide-ranging and destructive consequences of these moves. Shutting down access to popular services or to the whole internet – even for a short period of time – undermines economic growth, puts lives in jeopardy, separates people from friends and family, and erodes confidence in the governments that take such drastic and ill-advised steps."--Darrell M. West, infra, p.9 (emphasis added).

Global economy loses billions from internet shutdowns | Brookings Institution | Brookings.edu by Darrell M. West: "In my new paper (pdf), I detail the economic costs to countries that intentionally disrupt citizens’ digital access. I found 81 short-term internet shutdowns that occurred in 19 countries between July 1, 2015 and June 30, 2016, and estimated that such obstruction cost the global economy at least US$2.4 billion." Excerpt--Table 3--below: 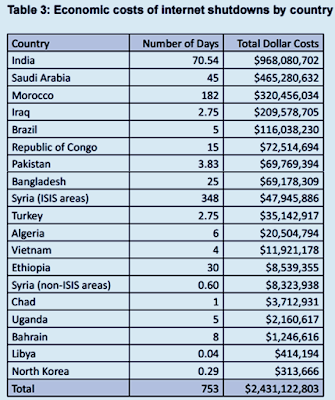 Internet shutdowns cost India $1B, more than any other country | HindustanTimes.com: "... To shut down the internet anywhere in the country, usually the police or state government file a request with the state’s Department of Telecommunications. The department then orders the internet service provider — Airtel, Tata, BSNL, and so on — to cut the data. Decisions to cut off the internet are often ill-conceived. In February, for example, the Gujarat State Subsidiary Selection Board was worried about cheating during the Revenue Accountant Recruitment Exam. Rather than simply banning applicants from bringing electronic devices into the examination room, the board shut down the internet across the state ..."

The Obama administration should not have attempted to misuse its instruments of state to stop criticism of its ruling party candidate.
— WikiLeaks (@wikileaks) October 21, 2016

U.S. Government's Role in Shutdown of WikiLeaks Founder's Internet--U.S. Urged Ecuador to Act Against WikiLeaks Leader Assange | NBCnews.com: "Quiet pressure from the U.S. government played a role in Ecuador's decision to block WikiLeaks founder Julian Assange from using the internet at Ecuador's London embassy, U.S. officials told NBC News." See also: On WikiLeaks, Journalism, and Privacy: Reporting on the Podesta Archive is an Easy Call | TheIntercept.com by Glenn Greenwald: "... Hillary Clinton’s supporters will try to find ways to delegitimize all reporting that reflects negatively on her, while justifying and glorifying all reporting that reflects negatively on Republicans. Much of the furious reaction to WikiLeaks is about little other than that ..."

Feature •  New gTLD .AMAZON IRP UPDATE (pdf): "... Conduct of the IRP Hearing ...  An in-person hearing will take place at the offices of Jones Day in Los Angeles, California ... Counsel are requested to confer and provide Panel with as many dates as they believe are suitable between the March 6-March 24, 2017 for the hearing ... " For more, see Amazon EU S.à.r.l. v. ICANN.


"Ironically, this could be a BIG win for the plaintiff DCA (DotConnectAfrica Trust). Unlike U.S. federal courts where unanimous jury verdicts are required, in a California civil case, it only takes 9 of the 12 jurors to agree on a verdict ... The U.S. District Court Judge had previously assigned this case to a (10-12 days) jury trial beginning February 28, 2017. See Scheduling Order ..."

•  A look at statistics on the Chinese domain market | Coreile.com: "Obviously, .CN takes the largest share of the domain market. However ... we know .COM commands the highest prices. So while .COM is not king in terms of volume, it is still king in terms of prestige and prices in China. There is no indication yet that such position will change any time soon."

•  Latest ICANN report reveals China’s drive to become a dominant player in new gTLDs | Blog | WorldTrademarkReview.com: "... many trademark counsel will see the growing involvement of Chinese entities in the domain marketplace as a portent of an even greater China-related enforcement workload in the future."

•  $NAME | Is Rightside's Strategy Showing Results? | whizzbangsblog.com: "... Donuts, offered $70m for the suite of Rightside domain extensions [new gTLDs] back in June. In my opinion it’s a gutsy move to say no to such an offer in light of the slow growth numbers ..." (emphasis added)

•  Root Zone Maintainer Service Agreement and .COM RA Amendment Now Effective: "... the cooperative agreement between NTIA and Verisign was amended to release Verisign from its root zone maintainer obligations. Verisign will now perform the root zone maintainer services forICANN under the [new] Root Zone Maintainer Service Agreement (RZMA). ICANN and Verisign are in the process of switching to the root zone management systems that do not include NTIA’s authorization role. The changes to the cooperative agreement between NTIA and Verisign can be found here. For more information, visit Verisign’s Q&A here. Additionally, as previously approved by ICANN’s Board resolution on 15 September (following a 43-day public comment process), ICANN has signed the .COM Registry Agreement amendment. The .COM Registry Agreement amendment is now effective through 30 November 2024 to coincide with the term of the RZMA ..."--ICANN.org, Oct 20, 2016

•   How to combat the risks of impersonation emails, imitative domains?--see post by Thompson Coburn LLP | JDSupra.com.

•  Q3 2016 financial results coverage this coming week on Domain Mondo:
•  Most popular posts (# of pageviews Sun-Sat) this past week on DomainMondo.com: