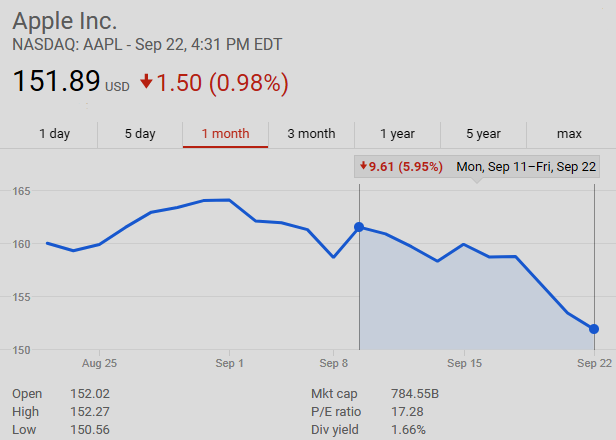 2) Everyone Wants To Make A High-End Phone: Google & HTC

Google (NASDAQ: GOOG, GOOGL) and HTC Corporation (TWSE: 2489) "announced a definitive agreement under which certain HTC employees – many of whom are already working with Google to develop Pixel smartphones – will join Google. HTC will receive US$1.1 billion in cash from Google as part of the transaction. Separately, Google will receive a non-exclusive license for HTC intellectual property (IP) ... this agreement also represents a significant investment by Google in Taiwan as a key innovation and technology hub ... expected to close by early 2018."--HTC.com, 21 Sep 2017.--About 2,000 HTC staffers to join Google; HTC to continue making its own smartphones, including a new flagship model.

3) Cord-Cutting Trends--Cable Is For Old People:

Cord Cutters to Top 22 Million in U.S. by End of 2017 (Study) | Variety.com: "By 2021, the number of cord-cutters will nearly equal the number of people who have never had pay TV — a total of 81 million U.S. adults." See also Cable News Is Almost Exclusively Watched by Old People.


"The last couple of years, a few friends pulled the plug on cable/satellite ... my daughter Katie ditched the corded life, as have many (most?) of her Millennial friends. They have been doing the "streaming thing," first with subscription models such as Netflix (NASDAQ:NFLX) and Amazon (NASDAQ:AMZN) Prime, and then with expanded services offering network bundles: Sling TV, PlayStation Vue, Hulu with Live TV, YouTube TV, etc. Those who want to add a little "premium" to their lives can get stand-alone services from HBO or Showtime. (A basic guide to streaming options can be found on the Consumer Reports free site.)."--SeekingAlpha.com.

Editor's note: best option for many may be either, or both, an Amazon Prime subscription (using an Amazon Fire TV Stick which will give you access to Amazon Prime content as well as Netflix (subscription), HBO and much more via Amazon Channels, AND/OR a Google Chromecast to access the free and à la carte and subscription content available from the internet and via Google Play (including apps). Total one-time hardware cost less than $75.00 (Fire Stick $39.99 + Chromecast $35). Put a little money into a quality screen, good internet connection (including router and modem), and pay for only the content you really want.

"Investing, in other words, is an exercise in mass psychology. I’ve spent decades studying it, and believe that one way to predict future market moves is to sort through the narratives that sweep through the population and influence decisions on whether to buy or sell. Such an analysis is a matter of art as much as science, however. Getting it right is crucial in the United States right now, because stock market valuations are already high enough to be worrisome."--Robert J.Shiller, Sept 15, 2017, NYTimes.com.

Separating the Dos From the Don'ts of Investing | Bloomberg.com: Diversification is the idea of reducing specific risk in your portfolio.

Investment Gurus: Beware of investing advice from market gurus | usatoday.com: "... the ninth anniversary of Lehman Brothers’ bankruptcy and the subsequent collapse of our country’s financial system. One of the most important lessons we can learn is that no one — not even the experts — saw it coming."

US$--The Demise of the U.S. Dollar? Don't Hold Your Breath--"The USD is still the dominant reserve currency, despite decades of diversification. Global reserves (allocated and unallocated) are over $12 trillion. Note that China's RMB doesn't even show up in allocated reserves--it's a non-player because it's pegged to the USD. Why hold RMB when the peg can be changed at will? It's lower risk to just hold USD ... the problem of replacing the USD in all its roles is that no other issuer has a large enough economy and is willing to shoulder the risks and burdens of issuing a free-floating currency in sufficient size to meet global demands."--Charles Hugh Smith

Warren Buffett, The Sage of Omaha: “Whenever I hear people talk pessimistically about this country (U.S.), I think they’re out of their mind ... It has been 241 years since Thomas Jefferson wrote the Declaration of Independence ... Being short America has been a loser’s game. I predict to you it will continue to be a loser’s game.” Buffett said he expects the Dow Jones Industrial Average to be “over 1 million” in 100 years, up from Tuesday’s close of 22,370.80, given where the index was roughly a century ago.--Buffett speaking this week in New York.