Bloomberg.com video above published Feb 27, 2018: Christopher Calabrese, Center for Democracy and Technology (domain: cdt.org) VP of policy, and Bloomberg's Dina Bass discuss the Supreme Court hearing a case centering on how a decades-old law, Stored Communications Act of 1986, applies to data on the cloud. They speak with Bloomberg's Emily Chang on Bloomberg Technology.

Data Protection/Privacy Update: Seeking Input on Proposed Interim Model for GDPR Compliance | ICANN.org 28 Feb 2018: "We're now much closer to settling on a final interim model to use until the community adopts new policies to guide our work."--Göran Marby, ICANN President and CEO. See Proposed Interim Model for GDPR Compliance-- Summary Description (pdf) (The “Calzone Model”, 28 February 2018) Prepared by: ICANN Org--a high-level summary of the proposed interim model, including a proposal for an accreditation program for continued access to full Thick WHOIS data for accredited users/entities [accreditation program to be developed in consultation with the GAC]. The legal justification for collection and use of the WHOIS data included in the interim model is not included in this summary document, but will be based on legitimate interests of the controllers or third parties, and will be detailed in an analysis accompanying the final model.--excerpt below: 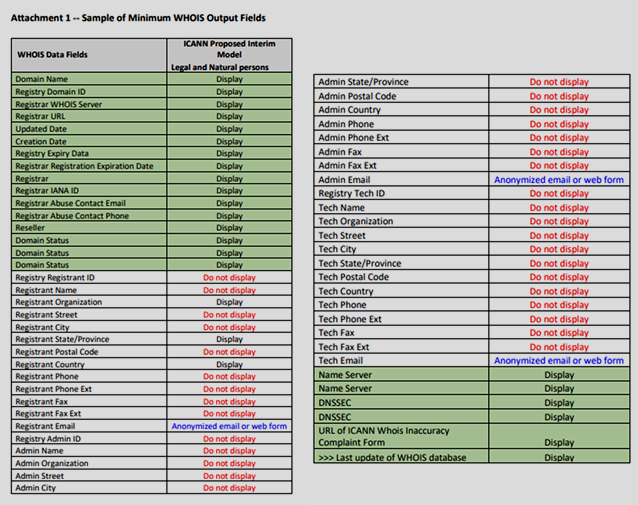 See also: a comparison [XLSX, 21 KB] of ICANN organization and community-proposed models based on various elements of registration data against the proposed interim model.

The net loss in new gTLD domain name registrations in just 2018 is now more than one million registrations through February 2018. More info here and here (under 3) Names, Domains & Trademarks)..

a. Domain Names: It's Not ALL About The Money--Forbes.com reports WNYC, a public radio station in New York, is using donations to acquire the Gothamist.com domain name and its archives and social media assets, shut down by billionaire owner Joe Ricketts, who had indicated the website, and companion website DNAInfo.com, never made any money. Similarly, two other public radio stations, KPCC in Los Angeles and WAMU in Washington, will respectively acquire LAist.com and DCist.com.

b. GoDaddy tones down its 'sexy' (or sexist) side to target Aussie businesses | afr.com

c. What's in a name? Approximately everything | heraldtribune.com

d. GoDaddy (NYSE:GDDY) announced a public offering of 16,916,000 shares of common stock by certain shareholders. GoDaddy will not receive proceeds from the sale.

a. Google search algorithms are not impartial. They can be biased, just like their designers | nbcnews.com: "Search patterns matter because sites like Google are becoming increasingly powerful arbiters of public information." See also: Bias already exists in search engine results, and it’s only going to get worse | MIT TechnologyReview.com: "artificial intelligence might make things worse."


b. Google Says It's Received 2.4 Million Takedown Requests Under EU's 'Right to Be Forgotten' Laws gizmodo.com: (and complied with 43% of them).

d. Cyberspace has always been about more than just freedom | rstreet.org

e. In the making: The largest internet filter Europe has ever seen | EDRi.org

g. Russiaphobia Gone Wild: Facebook says finds no new evidence Russia interfered in Brexit referendum | Reuters.com. Also note "Many news reports blaming Russian Twitter bots, some of which are not Russian and others not bots, are based on a single source and are likely overblown."-- Stop Blaming Russian Bots For Everything | buzzfeed.com.