UPDATE May 16, 13:50 UTC: No Observers ALLOWED at May 16 EPDP meeting -- ICANN BOARD does NOT adopt two Phase 1 Recommendations:
About 15 minutes before the May 16, 2019, EPDP meeting began the ICANN "EPDP support staff" posted the following to the public EPDP mail list:


"***BIG NOTE: Please note we are having technical issues with the audiocast for today's EPDP- Phase 2 Team meeting. It will not be available to listen 'live', but of course, the recordings will be posted immediately after the meeting. We will keep you posted if any changes."

Those "technical issues" may have something to do with the fact that the ICANN Board met in secret on May 15 (as is their usual custom) and only adopted some (pdf) (letter from ICANN Board Chair embed below) of the EPDP Phase 1 recommendations:


Dear EPDP Team,
Following last week’s meeting, the leadership team and staff support have worked together on developing a draft approach for tackling phase 2. We hope this strikes a balance between the different views expressed and will form the basis for a detailed work plan with concrete milestones and deliverables. You will find attached [embed below] a couple of slides that outline our current thinking in further detail, but here are some points I want to emphasize:

This is a draft approach for discussion and review. Based on your input prior and our discussion during next week’s meeting, we will further iterate and detail our approach, the proposed work plan and accompanying timeline. This draft is for discussion that, hopefully, will lead to a consensual agreement.

For the purpose of our exercise it is important to use definitions and terminology with the same understanding. We propose to develop and use working definitions without prejudice to consensual outcome. Final definitions can only be developed once the Team has finalized its work and agreed on its recommendations.

Based on the Team’s feedback in relation to the request to form a small team to engage with ICANN Org, I suggest to keep a plenary setting which will avoid creating a separate structure and ensure that everyone is part of discussion. Nevertheless, as this work on obtaining legal certainty is ongoing, I would propose that we deal with the charter questions and list of issues identified on slide 5 in an agnostic manner. In other words, we should refrain at the outset to deliberate on whether or not a System for Standardized Disclosure should be centralized or not, but rather we should focus on the commonalities and where needed identify that differentiation may be required depending on which model is ultimately determined to be legally compliant with GDPR and workable. I also expect that this approach would help inform the engagement of ICANN org and DPAs.

I appreciate that some of you may consider the timeline ambitious, but I’ve heard from almost everyone that the work on a System for Standardized Disclosure is a priority and as such I am committed to setting a target date for us to work towards. This will require your support and dedication. I am pretty confident I can count on that.

I look forward to receiving your feedback and would like to encourage you to focus your input on what, why and how things could or should be done differently, instead of simply saying that something cannot be acceptable or should not be done.--EPDP Chair Janis Karklins 8 May 2019.

Matt Serlin (RrSG): I agree from Goran’s letter the mandate of the small team is clear…what isn’t quite clear is how that mandate fits into the overall work plan for the broader group and how these two efforts ultimately will merge. Personally speaking I am very concerned that before we have really started our Phase 2 work at all, we are already looking to break off a certain group to work with ICANN [Org] on a critically important piece of the puzzle to our success. And let’s not forget our old friend Phase 1 which, to date, has not been approved by the Board and even when it is will still need to be implemented. (emphasis and link added)

Milton Mueller (NCSG): "I agree with Matt here. While I understand the motivation, the TSG itself was always a rather poorly conceived effort to jump the gun on the issues related to disclosure of redacted Whois data. We were told that its only purpose was to assess technical feasibility and make our work go faster, but in fact it opened up a parallel process raising all kinds of questions about how our work intersects with it.  Now we seem to be compounding the problem.  Let’s put a stop to it and get things in order before pushing out into yet another problematic direction ..."  (emphasis added)

Stephanie Perrin (NCSG): It [TSG] was a useful demonstration of RDAP capability.  Given the lack of legal/policy parameters and the assumptions on which it was based, we cannot rely on it as anything but that demonstration of technical possibilities. (emphasis added)


"... before being able to respond to your request, the EPDP Team would like to ask you for some further information in relation to your expectations regarding, amongst others:
*   What is the expected scope of work of the small group and could examples of the types of questions / issues the group is expected to work on be provided?
*   Size of the group when you refer to ‘a small number’, factoring in that the EPDP Team has a representative composition, as well as desired expertise;
*   Expected mode of operation for this work with ICANN Org, what does collaboration look like? – from the EPDP Team’s side there is an expectation that there would be full transparency around these discussions as well as engagement with the European Commission and Data Protection Authorities;
*   Time commitment and duration – what is the expected time commitment for this collaboration and is there any indication of when this work is expected to conclude?
"... As the EPDP Team is eager to move forward with its planning for phase 2, we hope that you can provide us with a response in time for further consideration during the EPDP Team’s next meeting which is scheduled for Thursday 16 May ..." (emphasis added)

"... supplemental budget from ICANN org’s FY19 operations will be made available immediately to support the GNSO Council’s request for the following resources that were identified and prioritized by the EPDP Team:
• Continued support for telecom services and transcriptions (estimated at $7,000);
• Professional mediation services to support the EPDP Team’s deliberations at
ICANN65 in Marrakech (estimated at $40,000);
• Continued availability of legal counsel, following the same process and approach in
phase 1, i.e., all proposed legal questions are vetted through the EPDP Team’s legal
committee (estimated at $50,000);
• ICANN65 travel support to be made available for EPDP Team members who would
otherwise not be able to attend and where no alternate is able to step in (estimated
at $28,000) ..."


Public Comments close on .BIZ May 14. All .BIZ comments may be read here. My .BIZ comment is here.and embed below. 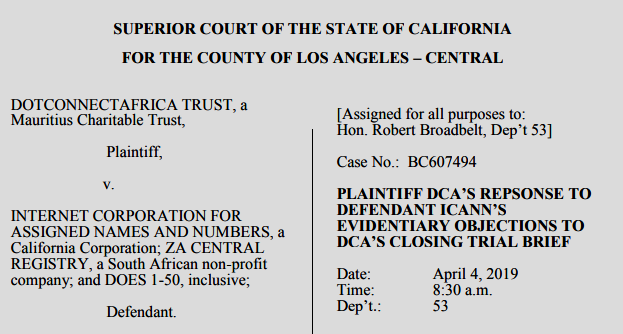 c. Registration Directory Service (RDS) Roadmap Update | ICANN.org: "... ICANN org has notified registries and registrars that they must implement a Registration Data Access Protocol (RDAP) service by 26 August 2019. RDAP enables users to access registration data and has several advantages over the current protocol (WHOIS), including more secure and differentiated access to registration data. ICANN.org worked with a discussion group of gTLD registries and registrars to develop an RDAP profile that provides technical instructions to how to implement an RDAP service in a consistent way ..."

d.  Webinar Invitation: Evolving ICANN’s Multistakeholder Model | ICANN.org: "... the Internet Corporation for Assigned Names and Numbers (ICANN) invites the community to continue an ongoing conversation about evolving ICANN's multistakeholder model of governance. Please join one of two webinars on 14 May 2019 at 1600 UTC or 15 May at 2300 UTC ..." More info here.
Webinar Details & How to Attend--dates and times:

07 May 2019 Letter from Director, Department of Technological Promotion, Ministry of Foreign Affairs of Brazil, Achilles Zaluar to ICANN Board Chair Cherine Chalaby re: new gTLD applications for .AMAZON, excerpt:

"... I sincerely hope that the decision of the ICANN Board on the .amazon applications will take into account the public interest represented by the eight Amazon countries, and that it will strengthen the legitimacy of ICANN as an entity with significant responsibilities for the management of Internet’s critical resources for the entire world." (emphasis added)

"The Brazilian Internet Steering Committee – CGI.br, in the exercise of its prerogatives under the Presidential Decree no. 4,829/2003, REAFFIRMING the positions already expressed in resolution CGI.br/RES/2013/011 on April 26, 2013, resolution CGI.br/RES/2013/022 on June 28, 2013, and in the PUBLIC NOTE of August 8, 2017 regarding the request for the “.AMAZON” top-level domain; CONSIDERING that the top-level domain name “.AMAZON” refers to, and is inextricably intertwined with, the identity of the Amazon communities and the Amazon region .... HEREBY REITERATES the support of all sectors of the Brazilian society represented in the Brazilian Internet Steering Committee – CGI.br (third sector, scientific and technological community, business sector, and government) for the rejection of the delegation of the top-level domain name “.AMAZON” exclusively to a private interest, to be operated as a closed brand top-level domain and in a manner that is inconsistent with the public interest, which would lead to the confiscation of the entire name space that is inextricably associated with the region, the countries and the peoples of the Amazon, contributing to the disappearance of the link between the term “Amazon” and the region, the countries and the peoples of the Amazon, their natural and cultural heritage and their identity on the Internet." (emphasis added)

Second, as I've said before, "the idea of having private .BRAND gTLDs was a mistake from the beginning, a corruption of the concept of generic top-level domains (gTLDs) as set forth in RFC 1591 written by Jon Postel, which predates the formation of ICANN and its "Californication" of the internet and global DNS. I'm with the South American countries. ICANN should do the "right thing" for once and end the .BRAND gTLD program, refund the application fees, and "undelegate" all .BRAND gTLDs from the internet "root," while allowing every owner of a distinctive trademark to block use of that mark as a gTLD in the future. End the ICANN extortion racket -- see .PING testimony."

A "brand" or "trademark" is neither a "monopoly" nor "generic." ICANN's .BRAND new gTLDs program is both ill-conceived and corrupt.

f. .MERCK: ditto the above

Tucows Inc. (NASDAQ: TCX) (brands include registrars eNom, Hover, OpenSRS, and ISP Ting), posted first quarter (Q1) 2019 financial results on Wednesday, May 8, 2019, after the market close.
Until Tuesday, May 14, shareholders, analysts and prospective investors can submit questions to Tucows’ management at ir@tucows.com. Management will post responses to questions of general interest to the Company’s website on Tuesday, May 21, 2019, at approximately 4:00 p.m. EDT.  All questions will receive a response, however, questions of a more specific nature may be responded to directly. See also Earnings Call Transcript, Tucows Inc. CEO Elliot Noss on Q1 2019 Results. Tucows is the second largest domain name registrar in the world with about 25 million domain names under management. See also Good Luck, Tucows Bulls | seekingalpha.com.

What Amazon, Google, Facebook, Tesla, and the Internet Know About You. See also Consumer Data Privacy Advocates to US Senate Committee: Here's How to Protect Consumers--eff.org and


Google Assistant is 10x faster and knows where your mom lives, "after three years, the voice-activated helper gets its biggest update yet. And it shows just how much Google already knows about you"--cnet.com.

The End of Cyberspace--internet theorists and companies once declared themselves free of nations and governance, but that’s all over now.--theatlantic.com. How ‘Cybersovereignty’ Splits the Once World Wide Web--bloomberg.com.

Europe Is Reining In Tech Giants. But Some Say It’s Going Too Far.--NYTimes.com.

How Tech Culture Has Changed Since The GDPR--forbes.com. The European Union’s General Data Protection Regulation, which became enforceable 25 May 2018, requires companies to disclose when they’ve been hacked. But greater acknowledgment of cyberattacks may lead to bigger premiums for cyberpolicies, and some policies written before "cybercrime became rampant" have outdated terms, leaving companies exposed--bloomberg.com.


5) Most Read this past week on DomainMondo.com: