Fadi Chehade apologizes to Brazil for 'misunderstanding' his farewell letter to the ICANN Board of Directors, which was published on the ICANN website:


“... Finally we set our fourth objective to evolve the multistakeholder model, which included increasing participation and promoting ethics and transparency. Among our concerns in this realm: The pressure from governments such as Brazil, China, India and Russia to bring the IANA Functions under the control of the United Nations via a multilateral instead of a multistakeholder governance model ...”--Fadi Chehade, Farewell Letter to the ICANN Board (pdf) Feb 19, 2016 (emphasis added) 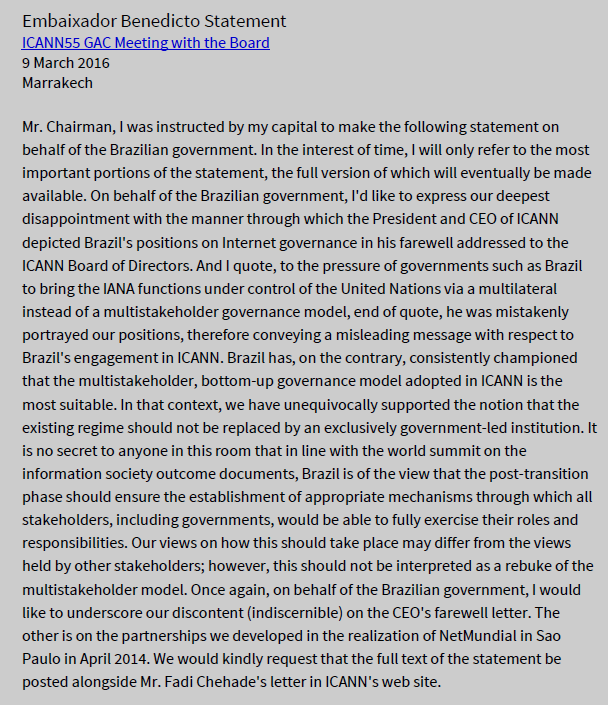 "Thank you, Ambassador Benedicto. I appreciate very much the statement of your government. And as I have shared with you before privately, I had no intention to position the Brazilian government in any different way than what I have said on multiple occasions, including the many openings at ICANN meetings. So if the letter that I wrote in closing my tenure for the board was misunderstood in any way, I offer you a private apology and I give now the Brazilian government a public apology. I would like to thank you and all the members of the Brazilian delegation, as well as the CGI, as well as her excellency, the President, who has done nothing but actually change the course of the entire Internet governance dialogue when she had the courage and the vision to engage and to do what she did in NetMundial. NetMundial would not have been possible without the Brazilian government steps. And NetMundial, as the U.S. Government said in this room a few days ago, in Larry Strickling's statement, NetMundial and Brazil really shifted the dialogue. So to you the thanks, to your government the thanks, to your people the thanks. And the Marco Civil work and other things that have been done in Brazil are, frankly, a beacon to the world in how Internet governance can be done in a multistakeholder way. So we thank you for that. And again, my sincere apology. I did not intend to in any way sully the deep commitment to multistakeholder governance that your government has." (Fadi Chehadé Statement (pdf) ICANN55 GAC Meeting with the Board 9 March 2016 Marrakech, emphasis added.)

OK, that takes care of Brazil--how about China, India and Russia?

Signing off for the last time as @icann_president. I'll be at @fchehade from here on out. So long #ICANN. pic.twitter.com/ZqjHbLZpjL
— ICANN President (@icann_president) March 10, 2016