Is ICANN complicit in China's censorship regime? Has ICANN's relationship with the Chinese government become a 'systemic problem' within ICANN? Three U.S. Senators want to know--


"It is deeply troubling that ICANN would put registry operators in a position of becoming an actor within the Chinese censorship regime. There is concern that this action could be an example of ICANN’s desire to build a close relationship with the Chinese government which could continue to move in a troubling direction once the United States Government ends its oversight. These concerns were recently confirmed by a member of the Non-Connected Party House’s (NCPH) Commercial Stakeholder Group who participated in a meeting with ICANN in February 2016 and stated, “The ICANN board wants to engage more with China and India following the IANA transition, which somewhat explains the board’s decision not to take action against Chehadé.”" --excerpt from US Sens. Cruz, Lankford, Lee letter, infra (emphasis added)

"Cruz, Lankford, and Lee Raise New Concerns About ICANN’s Relationship with Authoritarian China" is the headline in the latest (March 3, 2016) press release from the office U.S. Senator Ted Cruz, below (emphasis and links added):

"U.S. Sens. Ted Cruz (R-Texas), James Lankford (R-Okla.), and Mike Lee (R-Utah) today sent a letter to Internet Corporation for Assigned Names and Numbers (ICANN) Chairman Dr. Stephen Crocker, outlining new concerns that ICANN may have a direct operational relationship with the Chinese government and its potential implications for an Internet transition that ICANN is expected to approve in Morocco next week.

"Today’s letter to Dr. Crocker follows a letter Cruz, Lankford, and Lee sent to ICANN’S CEO Fadi Chehadé last month. The letter to Mr. Chehadé stated serious concerns and requested information regarding his involvement with the World Internet Conference, organized by the Chinese government, a regime notorious for its censorship of the Internet and criminalization of forms of online speech.

"“Last month, we sent you a letter stating our concerns regarding ICANN CEO Fadi Chehadé’s participation in the Chinese-government-sponsored World Internet Conference,” the senators wrote today. “Mr. Chehadé’s participation resulted in an agreement to co-chair a high-level advisory committee for the conference, which could make ICANN complicit in the Chinese censorship regime. Since sending our letter, additional evidence has come to light suggesting that ICANN’s relationship with the Chinese government may be a systemic problem within the organization itself and not limited to a single individual.”"

The letter seeks answers to a series of questions: 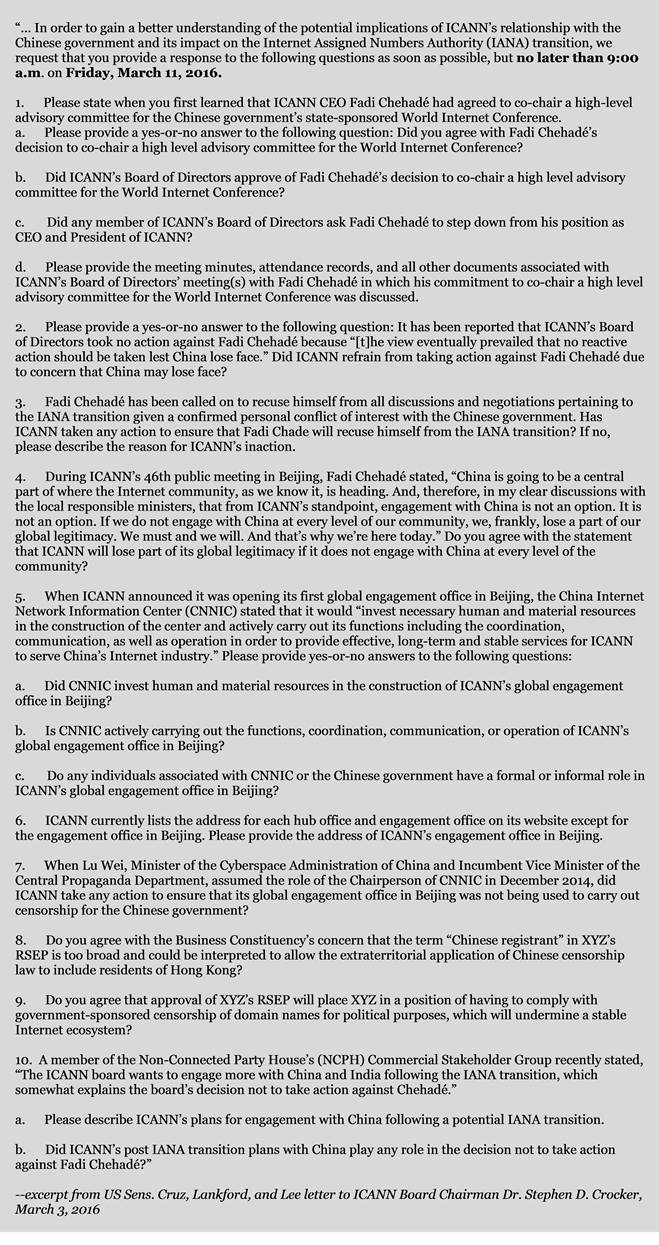 Read the latest letter from Senators Cruz, Lankford, and Lee to ICANN Board Chairman Steve Crocker in its entirety here (pdf) and embedded below: