ICANN a Steward? LOL! This Is How ICANN Wastes Registrants' Money

Dear Eberhard,
Thank you for your question. The Afralo showcase and tribute to Fadi was held on Monday night. The 2 purposes were combined so that they don’t conflict on the schedule and to save logistics and costs. The entire event cost approximately $106,000 to ICANN which was planned for 1200 people. The Afralo showcase (musicians, dancers,…) was paid for by Afralo. In case of interest, ICANN has previously held a community farewell cocktail for exiting CEOs at their last meeting. The cost of this is typically between $50,000 and $60,000. The additional $40,000 we had to pay this time was for the fitted out marquee including AV. This was required on this particular occasion as no other room large enough to accommodate the entire community was available. I hope this is helpful and addresses your question.
Best,
Xavier Calvez
CFO, ICANN

"Thank you very much.
I am shocked at the amount of money ICANN has to waste.
That does put the pressure being applied with regards to funding of WS2
into perspective.
greetings, el"  [Dr Eberhard W Lisse]

"Xavier [Xavier Calvez, ICANN CFO],
I have received the below.
How much did this extravaganza cost ICANN?
greetings, el"
[Dr Eberhard W Lisse - CCWG-Accountability member, representing ccNSO, from the African Region]

"Camels, Drummers And Hundreds of ICANNers: Last Night's AFRALO Showcase And Fadi Tribute Was A Hit! 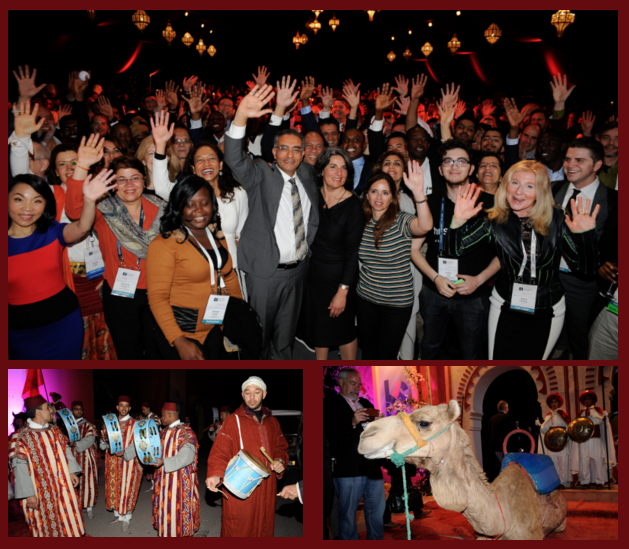 "Monday's night Tribute to Fadi was a lively affair. Hundreds of ICANN55 participants filled the Orion Tent at the Palmeraie Golf Palace and Resort to enjoy the food, hear traditional Moroccan music and honor Fadi Chehadé's legacy.  Many took to the stage during the evening's festivities including: El Mountassir Billah Azdine, Director General of the National Agency for Regulation of Telecommunications; Xiaodong Lee, CEO & CTO, China Internet Network Information Center; Demi Getschko, Member of the Board, Brazilian Internet Steering Committee; Rinalia Abdul Rahim, ICANN Board Member  and Board Chair Steve Crocker. If you didn't get a chance to take your own camel selfie, you can download last night's photos from ICANN's Flickr account here."--source: ICANN55 newsletter (links added)

The "Fadi" referred to is Fadi Chehade, ICANN's outgoing President & CEO, who gave notice last year that he was quitting ICANN with 2 years left on his contract, and after having served only 2 1/2 years (with a salary+benefits package in the range of $1,000,000+ annually).

Domain Mondo is sure that all domain name registrants worldwide (who fund the bulk of ICANN's wasteful spending), and U.S. Senator Ted Cruz et al, will all be interested to see how ICANN is such a "good steward" of money. Wait until ICANN is no longer subject to U.S. government oversight when the IANA stewardship transition is finished!

Here is an ICANN tweet from last night's "Tribute to Fadi"--