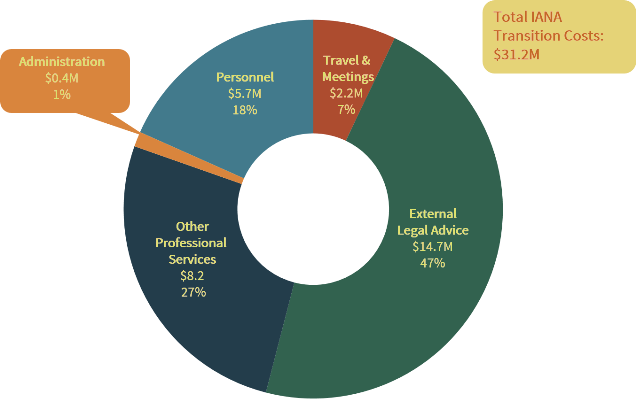 Cost categories include cost of staff support, travel and meetings costs, professional services (legal advice), and administrative costs. According to ICANN, costs disclosed are exclusively direct costs and do not include any overhead allocation.

IANA Transition Cost Summary Reports – Inception to October 16, 2016:
Legal Advice Costs below are also included in the Costs Summary above, but deal solely with the three legal firms employed: Jones Day; Sidley & Austin; Adler & Colvin. According to ICANN, when monthly invoices have not yet been received, estimates are requested from the legal firms. If no estimates are received from the legal firms, ICANN Finance produces an estimated monthly total cost, mainly based on historical trend.


"After 2 years nobody wants them, provide them free, and hope for a renewal. The demand is not there, the domains are not needed."

•  Stock Ticker Symbols Matter: ‘When you pick out the name of your stock, you need to be really careful.’--Xuejing Xing, co-author of the study--"Stocks benefit from the “likability” and even the pronounceability of a ticker symbol ... A study published in the Journal of Financial Markets finds that the “likability” and even the pronounceability of a ticker symbol are positively related to a stock’s value. In other words, if your stock can’t have the symbol IBM or AAPL, at least pick a clever one ... the study says, is that a likable symbol is associated with greater liquidity, since investors also tend to trade stocks with more-likable symbols at a higher rate. Alternatively, the study suggests, a higher value could be the result of mispricing; investors might unconsciously assign a higher value to a symbol that is easier to pronounce .... Other studies have agreed that companies with easy-to-pronounce names have higher value and liquidity ... Mr. Xing says he is at work on a related paper looking at corporate names and their effect on profitability."--WSJ.com. See also Company Domain Names, IPOs, Simple Rules, Stupid Mistakes | DomainMondo.com (7 Oct 2014).

•   Language: China’s tyranny of characters | Economist.com: "... Like Latin, classical written Chinese was a dead language, spoken by no one. A century ago, when language reformers began to introduce a common nationwide spoken tongue of Mandarin, they also abandoned the classical written language and replaced it with one that mirrored the spoken form, thus trying to synchronise their speech and their script. Some revolutionaries, including Mao Zedong, initially wanted to scrap Chinese characters altogether and replace them with an alphabet. They settled instead for a simplification of the characters and a standardisation of how they are pronounced and written in Roman letters, known as pinyin. Yet despite major success in literacy programmes, there are still 400m people in China who do not speak Mandarin, and some 100m who the government says cannot read at all. The actual number is undoubtedly higher ..."

•  How to break the internet: "DNS servers are today’s biggest targets ... when the DNS server is unavailable nothing can work – without the DNS there is no connection, therefore no business – so hackers achieve their ultimate goal of causing downtime for a company.“--TechRadar.com

•  AWS Protection from DDoS attacks: Amazon Web Services (AWS) is trying to help protect its customers with a new service named Shield aimed at mitigating DDoS impacts, and the free entry-level tier is enabled by default for all web applications running on AWS--PCWorld.com. 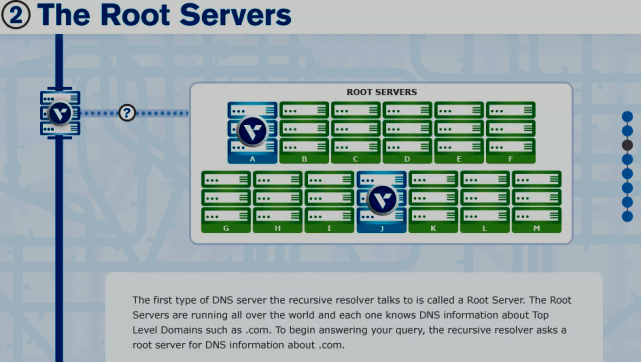 •  Most popular posts (# of pageviews Sun-Sat) this past week on DomainMondo.com: