UPDATE Feb 9, 2017: ICANN [Finally] Free to Proceed with the Delegation of .AFRICA Following Court Decision | ICANN.org: "LOS ANGELES – 9 February 2017 – The Internet Corporation for Assigned Names and Numbers (ICANN) announced that a California Superior Court has denied DotConnectAfrica’s (DCA’s) second Motion for Preliminary Injunction to stop the delegation of the .AFRICA generic top-level domain (gTLD) to ZA Central Registry (ZACR). DCA’s first Motion for Preliminary Injunction was denied by the Superior Court in December 2016. Among other things, the Judge found that it appears the "Covenant Not to Sue" found in the New gTLDApplicant Guidebook is enforceable, citing to the recent Federal District Court Order in the Ruby Glen, LLC v ICANN matter, wherein the Court held that the “covenant not to sue” in the Guidebook is enforceable. Accordingly, the Superior Court Judge ruled that “DCA's claims against ICANN for fraud and unfair business practices are likely to be barred. As a result, DCA cannot establish that it is likely to succeed on the merits.” View the Court Order here [embedded below]. In accordance with the terms of its Registry Agreement with ZACR for .AFRICA, ICANN will now follow its normal processes towards delegation." (emphasis added)


--End of update--original text below:

On Feb 3, 2016 ICANN updated its litigation page to indicate that on 4 January 2017, Court Order: Plaintiff's Ex Parte Application for Temporary Restraining Order is denied; Plaintiff's papers are deemed to be a new preliminary injunction motion; Parties are to submit supplemental briefs; and Preliminary Injunction hearing set for 31 January 2017 (which the Court later moved to 3 February 2017).  No further update as to the Feb 3rd hearing (as of Feb 5, 2017, 00:00 UTC).

2.  Want to know where the money is going at ICANN from all those domain name fees paid by registrants despite the fact that most domain name registrants have no representation within ICANN's so-called multistakeholder community?  Follow the money: 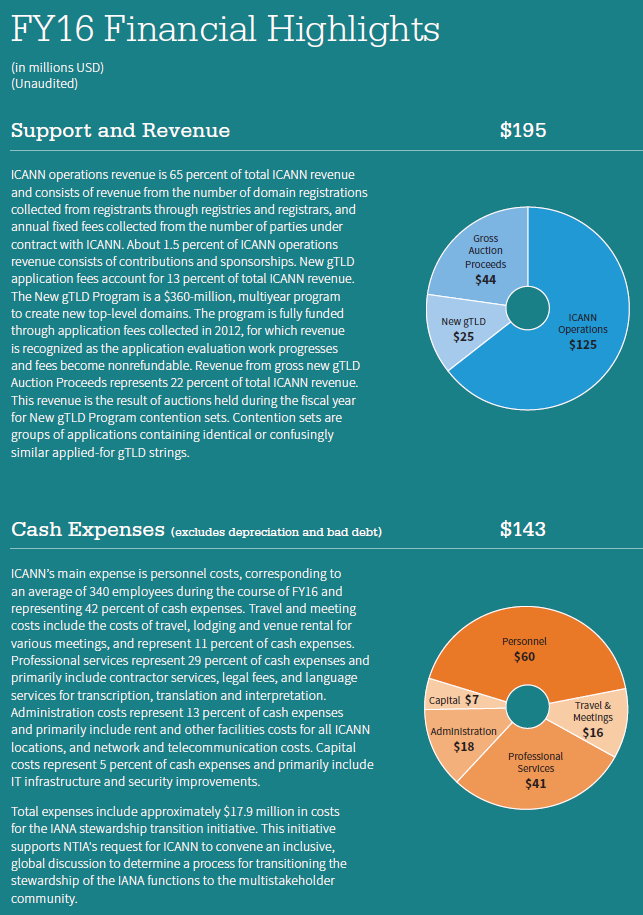 Advice equally applicable to the stakeholders of ICANN and its Global Domains Division (GDD): When shareholders aren’t watching, managers misbehave | ChicagoBooth.edu: "Perhaps the best advice to a distracted shareholder is to assume that management is misbehaving when no one is looking." 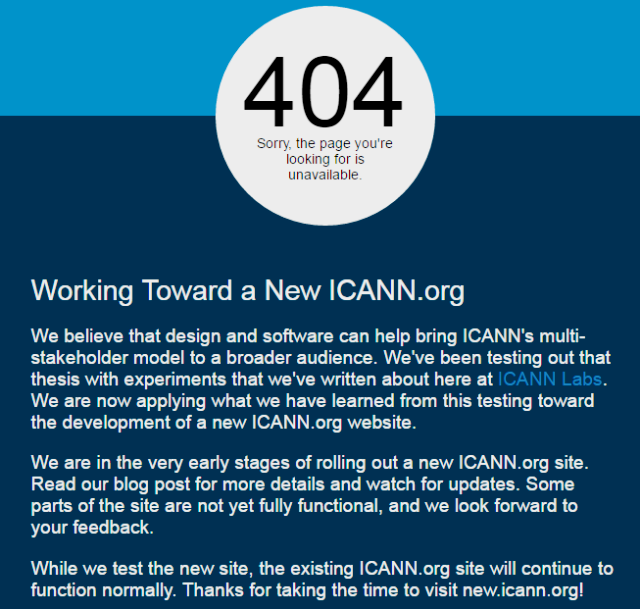 
"7.90. Accordingly, the IRP Panel is of the view that in order to have upheld the integrity of the system, in accordance with its Core Values, the ICANN Board was required properly to consider whether allegations of apparent bias in fact gave rise to a basis for reconsideration of an Expert Determination.  It failed to do so and, consequently, is in breach of its governing documents."--IRP Final Declaration, p.43 (pdf)(emphasis added)

b)  Letter 30 Jan 2017 (pdf) from Arif H. Ali, Partner, Dechert LLP, to Göran Marby and Members of the ICANN BGC re: New gTLD Application for .MUSIC:

c) Letter 30 Jan 2017 (pdf) from Arif H. Ali, Partner, Dechert LLP, to Göran Marby and Members of the ICANN Board re: New gTLD Application for .GAY:

•  Does the U.S. have new clout over the global internet? | FCW.com--John Kneuer, former head of the NTIA at a Feb. 2 U.S. House hearing--"Kneuer told the [House Energy and Commerce] committee [video here] that it would be "absolutely" appropriate for President Donald Trump or other U.S. official to back Amazon's effort to obtain a dot-Amazon top level domain name. "With the conclusion of the transition of the IANA contracts … the U.S  government can take, counterintuitively perhaps, a more proactive role for domestic companies…" Kneuer said. "When the U.S. government had its exclusive contractual relationship with ICANN, there was some hesitancy to be perceived as abusing that authority or overplaying that role." Some Republican lawmakers were highly critical of the [IANA transition] transfer and sought to block it, calling it essentially a giveaway of U.S. power ..." (emphasis added)

•  Special-Use Names Problem Statement (Jan 31 update) | ietf.org: 4.3 Summary: "... The assignment of Internet Names is not under the sole control of any one organization. IETF has authority in some cases, but only with respect to "technical uses." ICANN at present is the designated administrator of the root zone, but generally not of zones other than the root zone. And neither of these authorities can in any practical sense exclude the practice of ad-hoc use of names. This can be done by any entity that has control over one or more name servers or resolvers, in the context of any hosts and services that that entity operates. It can also be done by authors of software who decide that a special-use name is the right way to indicate the use of an alternate resolution mechanism."  See also Domain Name System Operations (dnsop) WG Virtual Meeting: 2017-02-16.

•  Quick Takes:
•  Q4 2016 Financial Results & Webcasts this coming week:
•  Domain registry and technology services provider Neustar NYSE: NSR--Neustar: Investor Relations - News Release Feb 2, 2017: "On December 14, 2016, Neustar announced that it had entered into a definitive merger agreement to be acquired by a private investment group led by Golden Gate Capital. Under the terms of the merger agreement, Neustar’s stockholders will be entitled to receive $33.50 per share following the closing of the proposed merger. The merger, which is expected to close no later than the end of the third quarter of 2017, is subject to approval by Neustar’s stockholders, regulatory approvals and other customary closing conditions. In light of the proposed merger, Neustar will not be providing guidance for 2017 and will not hold a conference call to discuss its results for full-year and fourth quarter 2016."--NeuStar (NYSE:NSR) Q4 2016 Results: EPS of $1.38 (missed estimates by $0.01); revenue $324.9M (+16.0% Y/Y) (miss by $1.08M).