MacroView: Ignore the Noise, Stay the Course, Full Speed Ahead

MacroView Feature • Much to the chagrin of certain establishment elites, their biased liberal media, Democratic Party cohorts and comrades who believe in denying free speech, particularly on college campuses, U.S. markets and investors are moving ahead despite MSM's attempts to generate a toxic atmosphere using "journalists" who have no interest in accurately or ethically reporting the "news," just their "noise." See Errors From The Press Are Piling Up In Trump's First Days | DailyCaller.com and Fake news rises on left | Axios.com: "Fake news is rising on the "disempowered" left ... The Atlantic's Robinson Meyer discovered that progressives now face their "own kinds of hoaxes and fables"..." and The 1st Annual Fake News Award Winners | LifeZette.com: "The mainstream media had some big ones — here are seven of the 'best'."

The Trump Rally has regained its footing on Wall Street: 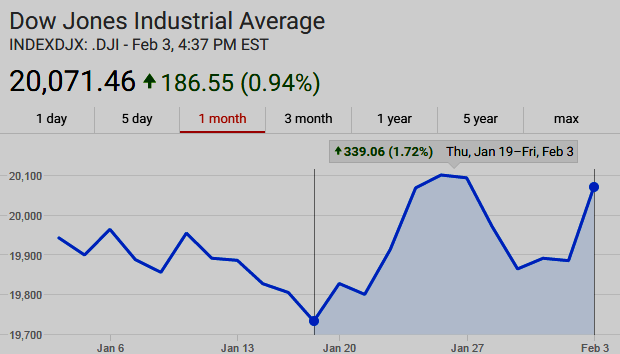 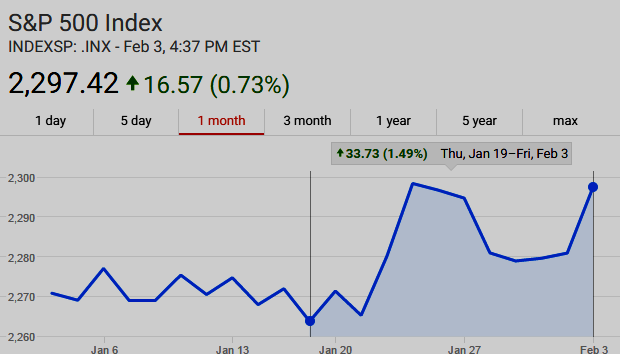 CNN learns a hard lesson from Donald Trump | WashingtonTimes.com: Donald Trump, a new kind of politician, shows no fear of the press "... He’s not afraid of the press ... This stuns some of the journalists, who are not accustomed to being called for their own mistakes." See also Bret Easton Ellis: Trump is President, get over it | IrishExaminer.com: "Speaking as he launched his art exhibition in central London alongside multimedia artist Alex Israel, Bret said: “I didn’t vote Trump, I’m just saying the hysteria is bothering me a lot more than the reality of what he’s doing."

•  Australian Media Has a Very Different Understanding of What Just Happened with President Trump | ijr.com: “Malcolm Turnbull thought he could outsmart Donald Trump and trap him into taking 1,250 of our boat people,” Andrew Bolt wrote in the Herald Sun of Melbourne. “Huge mistake, and now he's been humiliated.” Bolt's fellow columnist at the Herald Sun, Rita Panahi, wrote that “you have to admire Donald Trump's powers of perception. It took months for most of the media and much of the public to figure out the P.M. is a dud — Trump did it in just 25 minutes.”


•  Trump Effect: Shinzo Abe, Prime Minister of Japan, plans to propose a widespread economic U.S.--Japan cooperation package to create hundreds of thousands of jobs in the U.S., when he meets with Trump next week--"A $150 billion investment in U.S. infrastructure, funded by Japan's government and other private sources, over 10 years. The focus points, per Japanese media, would be high-speed trains, liquefied natural gas facilities in Asia to help expand exports of U.S. natural gas, and expanding nuclear energy-related sales. If implemented, the plan is expected to generate $450 billion in new business."--Axios.com

•  Mad Dog an "instant hit" in Asia | Axios.com: "That's how the Associated Press describes the welcome given to Trump's Secretary of Defense [retired U.S. Marine Corps General James 'Mad Dog' Mattis] in Japan and South Korea ... " Why it matters: China has been making illegitimate territorial claims and actively working to dominate and initmidate its Asian neighbors.

•  U.S. crude oil exports will surpass production in four OPEC nations in 2017, due to a resurgence in shale oil and gas, which Trump is counting on to create jobs and rebuild roads, schools and bridges, and may grow even more according to Bloomberg.com.

•  Extreme obstruction tactics by Senate Democrats are backfiring. A boycott of the Senate Finance Committee by Democrats in an attempt to thwart Trump's Cabinet nominees was cheered by liberal activists but "infuriated" Senate Finance Committee Chairman Orrin Hatch (R-Utah), who called the tactic "pathetic" and Democrats "idiots." Committee rules require at least one member from each party to be present for a meeting, but when Democrats boycotted the Committee, the Committee's Republicans simply changed the rules Wednesday to allow confirmation votes to proceed: “We took some unprecedented actions today due to the unprecedented obstruction on the part of our colleagues," Hatch said. The longer the unprecedented Democratic obstruction and grandstanding goes on, the more skilled Republicans in Washington will become at changing rules and procedures, which will leave Democrats with even less power than they otherwise have now. (Not a smart strategy if you're a Dem.)

•  Trump Cabinet status report on three of the most important positions for investors:

Rex Tillerson is one of Trump's best picks, it has been a long, long time since the U.S. has had a Secretary of State of his caliber:

Video above: Newly-confirmed Secretary of State Rex Tillerson spoke to State Department employees for the first time on Thursday, February 2, 2017.

Just think, we don't have to worry anymore about having a politician Secretary of State maintaining a homebrew email server with classified material, blaming Benghazi and Mideast violence on a YouTube video, exclaiming "what difference does it make" when American lives are lost, disclaiming responsibility for incidents like Benghazi, making a mess of Syria and Libya, or 'leveraging' her position as Secretary of State in various "pay to play" schemes.

•  Get Over It! "The worst-kept secret inside Democratic circles is how bitter Hillary Clinton's team is at President Obama over her election loss. We have heard from numerous, anguished people in Clinton-land blaming Obama -- more than Putin, FBI Director James Comey or, um, Hillary herself -- for the defeat."--Axios.com

•  President Trump's nominee for the Supreme Court, Judge Neil Gorsuch, will be confirmed:

Video above published Feb 1, 2017: CNBC.com's Wilfred Frost reports that the first measure put to the U.K. Parliament on Brexit has passed 498 votes in favor to only 114 opposing.

•  Italy Increasingly Likely to Abandon the Euro | MishTalk.com: "The only missing ingredient is an early election. And early elections are now the odds-on favorite."

•  Trump Looms Over EU Summit: "U.S. President Donald Trump loomed over a Mediterranean gathering of European leaders ... annoyed by the new U.S. President’s biting remarks about the viability of the EU project ..."--Bloomberg.com. See also How France has become the number one target for extremists in Europe and has been repeatedly brutalised in terrifying new war against terror | thesun.co.uk and French soldier shoots, wounds machete-wielding attacker at Paris Louvre | Reuters.com: Paris, Fri Feb 3, 2017: The man shouted Allahu Akbar and rushed at police and soldiers before being shot.

•   Is Germany a Currency Manipulator? China? Arguably Yes, Under Bill Obama Signed: Full Blown Currency War on Deck | MishTalk.com: "Germany and China each meet at least 3 of the 4 criteria. China may meet all four. Trump may decide 3 out of 4 is enough; and US manufacturers and steel producers will be egging him on to do just that. A bill that Obama likely never meant to use, is now a huge sword in Trump’s hand."

One More Thing: The Central Banks Pull Back: Now It's Up to Fiscal Policy to "Save the World" | charleshughsmith.blogspot.com: Remember when the financial media was in a tizzy of excitement, speculating on what new central bank expansion would send the global markets higher in paroxysms of risk-on joy? Those days are gone ...