Rightside Group, Ltd, (NASDAQ:NAME) will release Q1 2016 earnings after market close on May 10, followed by a conference call and audio webcast with investors and analysts to discuss the financial results.

*Question: Will Rightside ever be profitable without continuing to play newgTLDs "poker" in "ICANN's ngTLDs casino"?

Liquidity and Capital Resources
As of March 31, 2016, cash and cash equivalents increased to $47.0 million, compared to $45.1 million as of December 31, 2015.
At the end of the first quarter, the Company had letters of credit totaling $11 million outstanding with approximately $19 million of available borrowing capacity under its revolving credit facility with Silicon Valley Bank.

*Both presentations will be available through a live audio webcast accessible from the Investors section of Rightside's website at http://investors.rightside.co/. An archived replay of the webcast will also be available for 90 days following the live presentation. 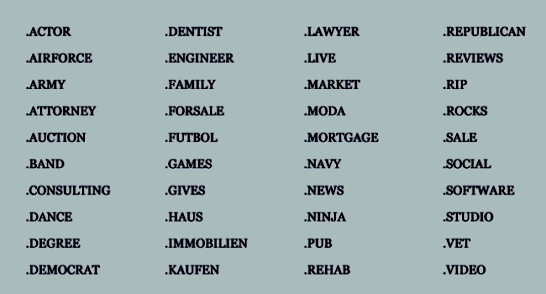 "I am troubled by the pivot toward, and unrelenting propaganda about, new generic top-level domain names (“GTLDs”). Whilst I concede that new GTLDs are one of many opportunities in the emerging market for second generation domain names, Rightside Group, Ltd. (“Rightside”, “NAME”, or our “Company”) is the second-largest domain name registrar, a business that is here and now. I don’t hear Rightside speaking to this strength. Our Company glosses over this critical revenue component and plays up new GTLDs at the expense of the revenue contribution made by the traditional registrar business.

"The user interfaces at eNom and Namejet look and feel clumsy and stale. Looking past the main page of NAME’s sites, the logged-in front-end infrastructure is untouched and acts like time capsule to what existed half a decade ago. Most of our growth in names under management is coming from a reseller channel that is out-executing your own in-house registrar eNom.

"While I am a believer in new GTLDs, it is going to be many years before their revenue in any way materially approaches the revenue potential of our registrar operations. In my view, NAME’s registrar has become like a crazy aunt kept in the basement, one that you refuse to adequately clothe or feed, but who steadfastly spins straw into gold used to subsidize a stable of largely substandard new GTLDs such as .democrat, .dance, .army, .navy, and .airforce. Most of these new GTLDs are irrelevant and will never be sold in material volumes. NAME is holding back the growth potential of your registrar by pushing garbage extensions to a user base that quietly knows better.

"Rightside is a gem in that it has many assets which are unique or difficult to duplicate. Cannell Capital LLC would not have acquired 1,389,953 shares otherwise. We have some good new domain-endings as well, with .news being one example, but this particular domain-ending and a clutch of others like it do not constitute enough of a “front” to gloss over the majority of your extensions which are low in value and should be spun-off. I believe that we should sell or even abandon some of our worst extensions. They should not consume all the resources of our Company at the expense of the assets that are currently profitable.

"The current members of the Board of Directors and indeed many of your shareholders don’t seem to recognize this. I do. Today I stand up to be that paladin. To wit, I submit both a plan and a request: (i) Unify all Company products under the eNom.com brand; (ii) Terminate no less than 20% of your weaker staff; (iii) Move the Name.com entity to Seattle under the eNom.com brand and close expensive ancillary offices; (iv) Rebuild and relaunch the front-end infrastructure at eNom.com to bring it to the current standard expected by consumers; (v) Refinance all debt; and (vi) Add two new board members with a suggestion, but not a requirement that two incumbents resign ..." (emphasis added)