4,001 Days: The Major Hurricane Drought Continues | DrRoySpencer.com: Oct 7, 2016: "... 4,001 days since the last major hurricane (Wilma in 2005) made landfall in the United States. A major hurricane (Category 3 to 5) has maximum sustained winds of at least 111 mph, and “landfall” means the center of the hurricane eye crosses the coastline. This morning it looks like Matthew will probably not make landfall along the northeast coast of Florida ... Media hype also exaggerates the problem ... most of the warned population is under the impression they, personally, are going to experience such extreme conditions ... I don’t think we will solve the over-warning problem of severe weather events any time soon ..."
There are real negative consequences when you subject a large population to unnecessary mandatory evacuations. What are the costs, in terms of injury and loss of life (e.g., traffic accidents due to fleeing the evacuation area, etc.), and economic losses? No one knows, no study has been done as far as I know. The reason we will continue to have over-warning a/k/a over-hyping (see this and this) is mainly because it feeds the whole government-media-industrial complex--media hype is good for ratings, politicians and government officials get a lot of free publicity as well as justification for whole bureaucracies funded by taxpayers, and sales (and prices) spike for everything from supplies to contractor repairs (scam artists are already in Florida ready to exploit the vulnerable). In other words, there is too much money being made for there to be an end to overhyping.

Having encountered hurricanes while bluewater sailing, and residing in Florida in 2004 when 4 hurricanes (3 major) hit the state, I will share my experience. There are two primary categories of things you need to know when it comes to hurricanes:
From an assessment of the above, one must decide (in advance) whether to 1) evacuate, or 2) shelter-in-place. Based on what I know, and have experienced, and speaking only for myself, I probably would not have evacuated for Hurricane Matthew unless I was living in a low-lying (storm surge is the biggest danger) coastal area in the affected area (in Florida, e.g., along the east coast from Palm Beach to the GA-FL state line). Everyone's situation is different. However there are key facts about Hurricane Matthew that the media either ignored or were ignorant of: in the northern hemisphere, when a hurricane is moving north (like Matthew), the eastern half of the hurricane is the most dangerous because you add  wind speed to the hurricane's forward motion speed, whereas on the western side (the 'Florida side' in Matthew's case, or counterclockwise from its leading edge), you subtract the hurricane's forward motion speed from the hurricane's wind speed, read more here (pdf).

Finally, for the techies, note that the eye of Hurricane Matthew passed directly over a weather buoy (hat tip: Hacker News | news.ycombinator.com): 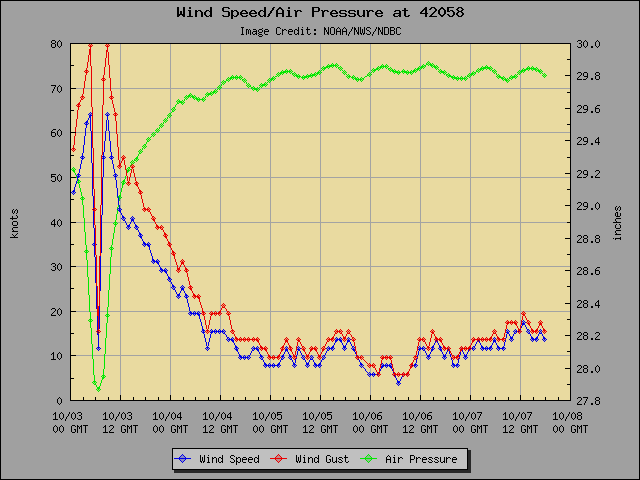 • Who will buy Twitter? Recode.net reported this week that everyone has lost interest in acquiring Twitter $TWTR (see this week's chart below) other than perhaps Salesforce.com, Inc., $CRM, whose CEO is Marc Benioff. We should know something definitive before the end of the month. See also: Why Twitter Will Be Bought | SeekingAlpha.com and "Twitter is a news medium. It’s all about information."--Today’s Twitter Rules | Lefsetz.com.
• Google Pixel, Home, etc: A Guide to Google's Gear:


Google is taking shots at Amazon, Apple and Samsung with its new line up of hardware products announced Tuesday. Here's a look at the five new products the company is launching for the 2016 holiday season. Video above published by WSJ.com Oct 5, 2016.

Remember when Google bought Motorola and actually made smartphones? Well, Google's back in the smartphone business (with help from HTC and others), and if you want a premium smartphone, priced accordingly, here's your chance. Google Smartphones: Pixel is $649 for 32GB, $749 for 128GB; Pixel XL is $769 for 32GB, $869 for 128GB; pre-order now, ships Oct. 20 in Quite Black, Really Blue, Very Silver. Buy via Google store, Project Fi, BestBuy, or Verizon.

•  EU vs Google: The European Union’s competition regulator is intending to force changes to Google-parent Alphabet Inc.’s ($GOOG, $GOOGL) business practices and levying significant fines for breaching the EU’s antitrust rules, according to documents reviewed by The Wall Street Journal--WSJ.com. Google has until October 31 to reply to EU's Android antitrust charges.

•  A billion here, a billion there--Verizon wants $1B discount on [$4.8B] Yahoo deal after reports of hacking, spying | New York Post.

•  Fake Internet Traffic: Audience Numbers Are Garbage, And Nobody Knows How Many People See Anything--Techdirt.com: "... internet traffic is [at least] half-fake and everyone's known it for years, but there's no incentive to actually acknowledge it ... so much of the advertising industry is pure waste ..."

•  Julian Assange vows Google & US election leaks as WikiLeaks.org turns 10--CNET.com: Assange denied reports that he intended to harm the campaign of Democratic candidate Hillary Clinton, although he did describe the reaction to leaks of Democratic emails as "neo-McCarthy-esque hysteria." Asked if he had any affinity for Clinton's Republican rival Donald Trump, Assange said, "I feel sorry for Hillary Clinton and Donald Trump. They are two people that are tormented by their ambitions."

•  Political activists turning to chatbots--AI bots (artificial-intelligence-powered bots) that respond to user queries on platforms like Facebook Messenger, as a way of staying in contact with "hard to reach younger, mobile-centric voters"--Politico.com.

•  Amazon.com Inc. ($AMZN) is cracking down on biased customer reviews by banning incentivized reviews of free or discounted products--TheVerge.com.

•  Uber-killer? A Waze.com trial program is now confirmed to be gradually extending to Waze Rider users in the San Francisco area--SeekingAlpha.com. For more: waze.com/carpool.

•  Earnings Season (Q3 2016 earnings results) preview:  For third quarter (ending Sep 30), 2016, the estimated earnings decline for the S&P 500 is -2.1%. If the index reports a decline in earnings for Q3, it will mark the first time the index has recorded six consecutive quarters of year-over-year declines in earnings since FactSet.com began tracking the data in Q3 2008--read more here (pdf).