Big tech companies have the momentum to be even larger?

Video above published Jul 29, 2017: Ann Winblad, of Hummer Winblad Venture Partners (domain: hwvp.com), on the outlook for the tech sector. Apple Inc. is the largest company in the world by market capitalization. Apple's assets include more than $250 billion in cash. 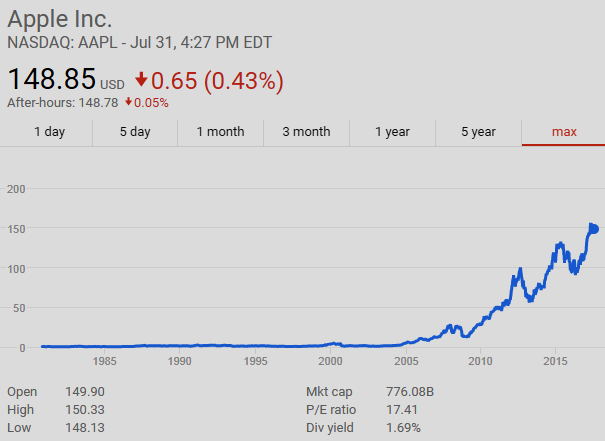 Apple was founded April 1, 1976, in Cupertino, CA, by Steve Jobs, Steve Wozniak, and Ronald Wayne. On December 12, 1980, Apple launched the Initial Public Offering (IPO) of its stock on the NASDAQ (domain: nasdaq.com) stock market. When Apple went public, it generated more capital than any IPO since Ford Motor Company in 1956 and instantly created more millionaires (about 300) than any company in history. Read more at History of Apple Inc. | Wikipedia.org.

FY17 Q3 Results: Revenue Growth of 7 Percent and EPS Growth of 17 Percent - Services Revenue Hits All-Time Quarterly Record - iPhone sales up 2% YoY to 41M, iPad sales up 15% YoY and 28% QoQ to 11.4M, Mac sales up 1% YoY to 4.3M, and Greater China revenue down 10% YoY to $8B.
Press release:"August 1, 2017 — Apple today announced financial results for its fiscal 2017 third quarter ended July 1, 2017. The Company posted quarterly revenue of $45.4 billion and quarterly earnings per diluted share of $1.67. These results compare to revenue of $42.4 billion and earnings per diluted share of $1.42 in the year-ago quarter. International sales accounted for 61 percent of the quarter’s revenue.


“With revenue up 7 percent year-over-year, we’re happy to report our third consecutive quarter of accelerating growth and an all-time quarterly record for Services revenue,” said Tim Cook, Apple’s CEO. “We hosted an incredibly successful Worldwide Developers Conference in June, and we’re very excited about the advances in iOS, macOS, watchOS and tvOS coming this fall.”

“We reported unit and revenue growth in all our product categories in the June quarter, driving 17 percent growth in earnings per share,” said Luca Maestri, Apple’s CFO. “We also returned $11.7 billion to investors during the quarter, bringing cumulative capital returns under our program to almost $223 billion.”

Apple is providing the following guidance for its fiscal 2017 fourth quarter:
Apple’s board of directors has declared a cash dividend of $0.63 per share of the Company’s common stock. The dividend is payable on August 17, 2017 to shareholders of record as of the close of business on August 14, 2017. Apple will provide live streaming of its Q3 2017 financial results conference call beginning at 2:00 p.m. PDT on August 1, 2017 at www.apple.com/investor/earnings-call/. This webcast will also be available for replay for approximately two weeks thereafter.
Apple (AAPL) Q3 2017 Results - Earnings Call Transcript | SeekingAlpha.com: "I see Tencent as one of our biggest and best developers. They've done a great job of implementing a lot of iOS features in their apps and we're looking forward to working with them even more to build even greater experiences for our mutual users in China."--Apple CEO Tim Cook

$AAPL is trading up after-hours: 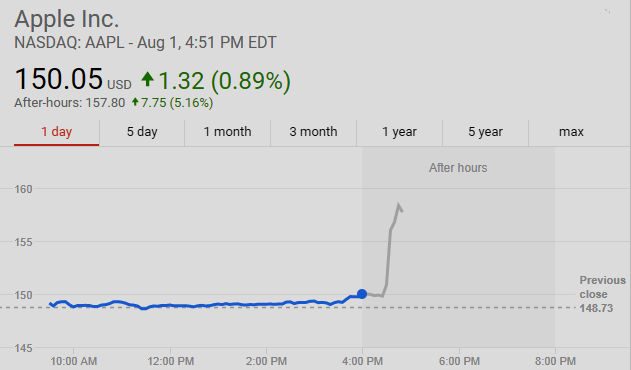