1) Is This The Last Round of ICANN New gTLD .AFRICA Litigation?
UPDATE Sept 10, 2017: New gTLD .AFRICA Litigation--Plaintiff DCA (DotConnectAfrica Trust) Survives ICANN's Motion for Summary Judgment--"ICANN's motion for summary judgment is denied as to the second, third, fourth, fifth, and tenth causes of action. The motion is granted as to the remaining causes of action."[p.10] [Dated Aug 9, 2017](emphasis added)."

Bottom Line: Either the Covenant Not To Sue in the New gTLD Applicant Guidebook is enforceable or not. Previously, the California Superior Court on February 3, 2017 (pdf), denied Plaintiff DotConnectAfrica Trust's (DCA) Motion for Preliminary Injunction citing the U.S. District Court Order in Ruby Glen, LLC v ICANN (pdf), holding that the "covenant not to sue" in the Guidebook is enforceable, thereby allowing ICANN to delegate .AFRICA in favor of registry operator ZA Central Registry.

c.  Where to Search UDRP Decisions | circleid.com: "Unfortunately, there is no longer an official, central repository of all UDRP decisions that is freely available online." [Editor's note: ICANN created the UDRP (note the broken links on that ICANN webpage), but no longer keeps a central repository of UDRP decisions for quality control oversight and review for consistency, education of trademark and domain name registrants, etc. ICANN would rather pay bloated salaries and benefits to the inept cronies* of ICANN ex-CEO Fadi Chehade and his "sidekick" ICANN Global Domains President Akram Atallah, rather than spend money doing its job competently for the global internet community. What would it take for ICANN to do its job properly in this regard? Just one lawyer who could work remotely from his/her home, provided ICANN required all UDRP providers to file their decisions electronically via a searchable, sortable, ICANN database interface.]


*IoNmag.asia: "only one member of the C-suite hired since [ICANN CEO] Chehade came on board has not been a friend or former co-worker [of Chehade and Atallah] ... Every new vice president based in the Los Angeles headquarters has been a friend or former co-worker. Frustrated with the community intransigence, Chehade hired from within the community to deal with the community, while his group in Los Angeles became increasingly separated from the broader organization and began to think of themselves as almost a separate company." (emphasis added)


"I'm sure quite a lot of "professional" analysis and discourse has led to serious errors of policy at ICANN. I'm sure a lot of professionals made predictions about new gTLDs and appropriate strategies, for themselves and their clients, all now proven wrong. Many folks lost money, time, and careers due to those mistakes, betting the wrong way. They're looking for a new direction, superior analysis, and better solutions than those of the past ... I think the evidence-based policy making (as opposed to the flawed policymaking at ICANN that got us here, which was based on incorrect conjectures and weak analysis) will ultimately lead us in the right direction."--George Kirikos [gnso-rpm-wg] (emphasis added) 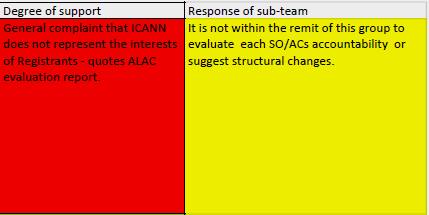 
"This is Greg [Greg Shatan, WS2 Jurisdiction SubGroup Rapporteur]. If I could just respond first, we have not yet reached the discussion of the path forward proposal. We will get to it after this discussion. I'd like on see if anybody else agrees with Thiago's [Thiago Braz Jardim Oliveira, Brazilian diplomat, member of GAC] world view of the group. I find it a conspiracy theory and I don't indulge in conspiracy theories and but everyone is entitled to their opinion and worldview, just not entitled to their own facts"(emphasis added). Listen to the Adobe Connect Video Replay or mp3 audio for more.

Discontinued Domains & Price Changes | Namecheap.com Blog: "... we do have to discontinue support of TLDs [top-level domains] from time to time. Some of our TLDs currently face significant price increases from the registry. As a result, we have decided to discontinue the sale of these [new gTLD] domains to protect our customers." (emphasis added) [Editor's note: don't look to ICANN for any consumer (registrant) protection, inept ICANN is the source of the problem.]

•  Apple and Amazon are helping China censor the internet | Slate.com

•  China is perfecting a new method for suppressing dissent on the internet | Vox.com

•  The War Over Internet Freedom Heats Up | capitalandmain.com: "The juggernaut of deregulation under the current administration threatens to crush the net neutralists."

Gold a safe haven? "... from July 1997 to September 1998, when the Asian financial crisis brought devaluations to half a dozen countries, the Russian ruble collapsed, and hedge fund Long-Term Capital Management was bailed out. Far from gaining from safe-haven flows, the yellow metal fell 13 percent ...."--Bloomberg.com

For cautious investors, I suggest reading thoroughly: How to Bet on a Bond Market Collapse | USNews.com: "... Gundlach warned that rising interest rates will negatively impact stock prices as well ..."

6) Most read posts (# of pageviews Sun-Sat) this past week on DomainMondo.com: