Blast from the Past: ICANN, New gTLD Domain Names, Conflicts of Interest (video)

Of course, at this same time (early 2012), the US Department of Commerce was threatening to pull the IANA contract away from ICANN due to its poor conflicts of interest policy:

Ethics Fight Over Domain Names Intensifies - New York Times March 18, 2012: "The Commerce Department ...warned the organization [ICANN] that it needed to tighten its rules against conflicts of interest or risk losing a central role.... ICANN has come under heightened scrutiny because of an initiative to increase vastly the number and variety of available Internet addresses. Under the plan, which ICANN is putting into effect, hundreds of new “top-level domains” — the letters like “com” that follow the “dot” in addresses — are set to be created. Some business groups say the expansion of domains will cause a rise in trademark violations and cybersquatting, while some governments object to ICANN’s move to create address suffixes like .xxx, for pornography. But the initiative has been cheered by companies that register and maintain Internet addresses. A number of current and former members of the ICANN board have close ties to such registrars or to concerns involved in other areas that stand to benefit from the expansion.“ICANN must place commercial and financial interests in their appropriate context,” said Mr. [Rod] Beckstrom [former ICANN Chairman]... “How can it do this if all top leadership is from the very domain-name industry it is supposed to coordinate independently? “A more subtle but related risk is the tangle of conflicting agendas within the board... the United States government is also dissatisfied with ICANN. The Commerce Department said it had canceled a request for proposals to run the so-called Internet Assigned Numbers Authority because none of the bids met its requirements: “the need for structural separation of policy-making from implementation, a robust companywide conflict of interest policy, provisions reflecting heightened respect for local country laws and a series of consultation and reporting requirements to increase transparency and accountability to the international community.” Eyebrows were raised last year when Peter Dengate Thrush, former chairman of ICANN and a fan of the domain name expansion, joined a company that invests in domain names." (emphasis added)

And now, 3 years later, what have ICANN's new gTLDs given us (besides a lot of money in ICANN's pocket)?

Cyber-squatting disputes up 300% amid web address explosion - Telegraph: "There has been a 313 percent increase in the number of disputes over the new generation of web addresses [new gTLD domain names] in the last eight months"

This internet address costs $2,500 annually—and it sucks - Quartz  "At the heart of the controversy is what .sucks is for. Critics see it as a “predatory shakedown scheme,” in the memorable words of one American politician."

ICANN must have no shame. 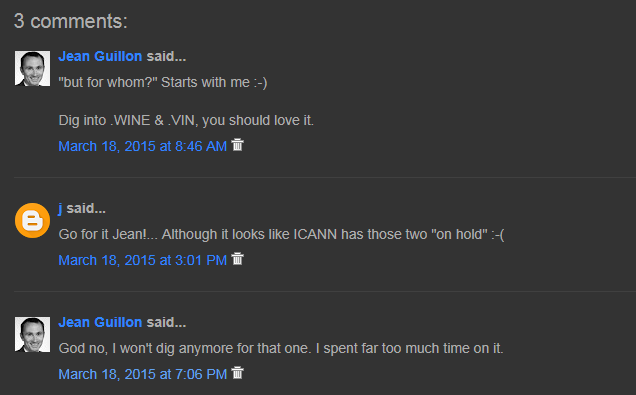