MacroView Feature • Doubling Down:"... it is capitalism itself that is threatened by the ongoing Martingale strategies of central banks. As central bank purchases grow, and negative/zero interest rate policies persist, they will increasingly inhibit capitalism from carrying out its primary function — the effective allocation of resources based upon return relative to risk ... This cannot end well."--Bill Gross. See also Bill Gross says global markets are one big casino created by central banks--MarketWatch.com.


Turning and turning in the widening gyre
The falcon cannot hear the falconer;
Things fall apart; the centre cannot hold;
Mere anarchy is loosed upon the world,
The blood-dimmed tide is loosed, and everywhere
The ceremony of innocence is drowned;
The best lack all conviction, while the worst
Are full of passionate intensity.--William Butler Yeats

•  The 3 Things That Spook People about the Stock Market:

•  Bridgewater Ray Dalio's Long-Term Debt Cycle Charts--Ritholtz.com: "It is no longer controversial to say that: … this isn’t a normal business cycle and we are likely in an environment of abnormally slow growth … the current tools of monetary policy will be a lot less effective going forward … the risks are asymmetric to the downside … investment returns will be very low going forward, and … the impatience with economic stagnation, especially among middle and lower income earners, is leading to dangerous populism and nationalism."

•  Deutsche Bank (db.com | $DB $DBK): German minister accuses Deutsche Bank of making speculation its business--"I did not know if I should laugh or cry ... [Deutsche Bank] made speculation a business model [and] is now saying it is a victim of speculators."--German Economy Minister Sigmar Gabriel--Reuters.com  See also Crisis of Globalization Lies Behind Deutsche Bank’s Troubles | WSJ.com: "Deutsche has also paid a high price for its global ambitions ... it tried to buy market share through aggressive pricing, acquiring a reputation among its rivals as the “dumb money” in the market."

•  A weak British Pound means UK-based assets are attracting more and more attention from foreign investors, particularly investors with US$. As a result, the London Stock Exchange benchmark index FTSE100 is up, up, up: 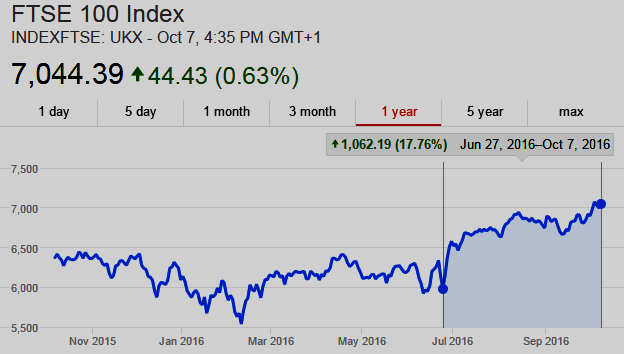 •  Venture Capital: It is a pricing, not a value, game! "At the time of a VC investment, the VC wants to push today’s pricing for the company lower, so that he or she can get a greater share of the equity for a given investment in the company. Subsequent to the investment, the VC will want the pricing to go higher for two reasons. First, it makes the unrealized returns on the VC portfolio a much more attractive number. Second, it also means that any subsequent equity capital raised will dilute the VC’s ownership stake less ... This is a business where success is measured less on the quality of the companies that you build (in terms of the cash flows and profits they generate) and more on the price you paid to get into the business and the price at which you exit this business, with that exit coming from either an IPO or a sale. Consequently, how much you are willing to pay for something becomes a process of judging what you will get when you exit and working backwards."--aswathdamodaran.blogspot.com.

•  Venture Capital hits a wall in Q3 as investments tumble 28% YOY: "According to a new report from the National Venture Capital Association, startups in the U.S. raised $15 billion in venture capital during the third quarter ending September, down 28.6 percent from $21 billion for the same period one year ago."--VentureBeat.com

•  Election 2016: One mashup of recent polls has Hillary Clinton ahead of Donald Trump but remember that the Financial Times poll tracker ahead of the Brexit vote had “Remain” up by 2 points the day of the referendum. Betting odds have recently had Clinton at a 75% chance of winning; they had “Remain” at 85% the day before that vote. The USC Dornsife / LATimes.com daily tracking poll, on the other hand, for weeks has shown Donald Trump leading Hillary Clinton. Consensus is that Trump's running mate, Indiana Gov. Mike Pence, won the VP Debate. Remaining Presidential debates: October 9th and October 19th (both are 9:00-10:30 pm EDT). Watch online here.

Q3 2016 Earnings Season--companies on Domain Mondo's coverage list:
Q3 2016 preview:  For Q3 2016, the estimated earnings decline for the S&P 500 is -2.1%. If the index reports a decline in earnings for Q3, it will mark the first time the index has recorded six consecutive quarters of year-over-year declines in earnings since FactSet.com began tracking the data in Q3 2008--read more here (pdf).