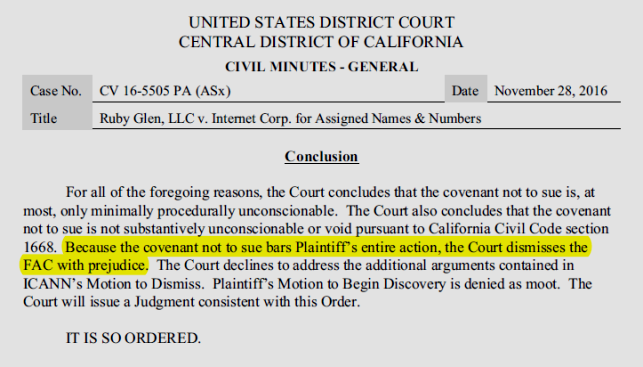 The District Court's Order and Judgment are embedded below. Further, in a footnote, Judge Anderson stated: [1] The Court does not find persuasive the preliminary analysis concerning the enforceability of the covenant not to sue conducted by the court in DotConnectAfrica Trust v. ICANN, Case No. 2:16-cv-862 RGK (JCx) (C.D. Cal. Apr. 12, 2016).

Whether Ruby Glen (Donuts) will appeal is unclear, although Jon Nevett, Donuts co-founder and Executive Vice President, released a statement according to DomainNameWire.com, stating "Donuts disagrees with the Court’s decision ... Donuts will continue to utilize the tools at its disposal to address this procedural failure."

If  Ruby Glen (Donuts) does appeal, that could be doing ICANN a big favor as ICANN would like a published Ninth Circuit Court of Appeals opinion affirming Judge Percy Anderson and enforcing the Covenant Not To Sue, which could then be cited as legal precedent in any case brought by new gTLD applicants, now, or in future rounds of new gTLDs.