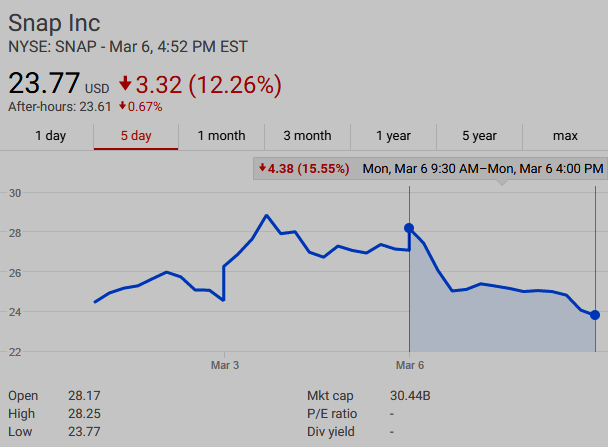 Snap Inc. (NYSE: SNAP) stock price fell Monday, March 6, 2017 (see chart above), erasing all of its post-IPO gains and fell back beneath $24.00, the price that it opened at last Thursday.

What else is bothering markets? Geopolitical risks from Washington, D.C. to the EU to China to North Korea. Here are two views of the building crisis in the European Union (EU):

Farage: The EU is dying before our very eyes


Video above published Mar 6, 2017, by FoxBusiness.com: Nigel Farage, former UK Independence Party leader, on what to expect from President Trump's meeting with German Chancellor Angela Merkel and the state of play in the upcoming elections in the Netherlands and France.

The European Union is facing a threat to its very existence

Video above published Mar 6, 2017, by The Economist | Economist.com: The Treaty of Rome was signed 60 years ago this month. But can European leaders make the EU appealing to a new generation of more sceptical voters?

In addition, the Fed's FOMC appears set for an interest rate increase at its next meeting March 14-15, and some Wall Street investors are in addict-like withdrawal from 8+ years of ZIRP.