1) New gTLD .AFRICA Litigation Case Update: "It ain't over till it's over"--Yogi Berra 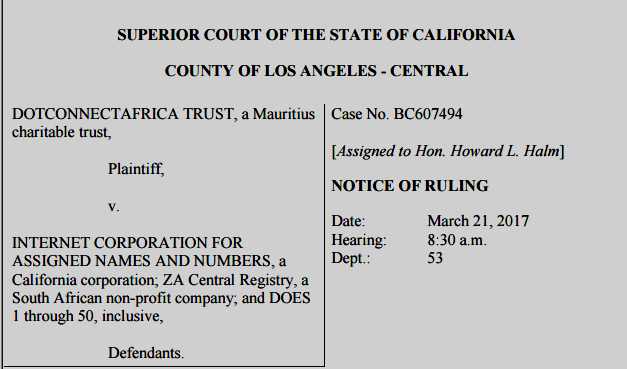 
“Is a “Googlee” a “wrong one”? A cricket enthusiast will say, “Yes of course.” In the virtual world too, the answer is well, yes, as the Petitioner, Mr. Gulshan Khatri found to his consternation, when he used it as a domain name: ‘googlee.in’.”--Delhi High Court’s Justice S Muralidhar in his domain name infringement decision in favor of Google.

•  Rebranding Your Law Firm: How a 150-Year-Old Firm Gave Itself a Makeover | JDSupra.com: "To have a successful website, we felt we must first have the appropriate domain ... We were successful in acquiring www.bradley.com even though it was originally registered with a foreign corporation."
•  End of the road for UDRP for copyright? | Lexology.com
•  China's Chery files trademark complaint against Mercedes over green car brand | Reuters.com--Mercedes-Benz is using the "EQ" name for a line of green-energy vehicles while Chery has used the name "eQ" for its two-door battery electric car for two years. Editor's Note: EQ.com is registered via GoDaddy to an individual in China but does not resolve.
•   Amazon Chime team responds to trademark suit, claims it wasn't aware of competing Chime service | GeekWire.com: "An Amazon Web Services employee claims the company had never heard of CafeX Communications and its competing Chime service when it decided to christen its new set of conferencing and collaboration tools Amazon Chime." Editor's note: neither Amazon nor CafeX are the registrant of chime.com (Chime Interactive).
•  That Taylor Swift Spotify-Rival Rumor, Explained by a Trademark Lawyer | VanityFair.com: "But if the filing that you may or may not use is likely to go public and possibly get misconstrued, why trademark at all?


“She needs that [trademark] registration for enhanced policing,” explained Schwimmer. “And there’s another thing, which is: you need registrations to get intermediaries to pay attention to you. So if you go to Amazon and want to take down stuff; you go to a domain name company or eBay, and you want them to take down the infringing stuff, [the companies] don't want to have to evaluate whether you are the real whatever. The easiest thing is to say, ‘Here is my trademark registration.’ ”" (emphasis added)

"... ICANN’s remit is limited to coordinating the allocation and assignment of Domain names, Internet Protocol(IP) addresses, Autonomous System (AS) numbers, and protocol port and parameter numbers. [See ICANN Bylaws] The SSAC believes that assessments based on content accessed through these unique identifiers should not be in scope for discussions regarding Human Rights for the ICANN organization. This may be different from the interests or remits of some stakeholder groups and their members. The SSAC believes strongly that any binding language that holds ICANN accountable to Human Rights values should fall within the scope of ICANN’s limited remit, and implemented via a Human Rights Impact Assessment followed by the development of a Corporate Social Responsibility (CSR) policy for ICANN. This CSR policy should cover the processes governing ICANN community participation, as well as the ICANN corporation itself ..."--ICANN Security and Stability Advisory Committtee--SAC092: SSAC Input to the Cross Community Working Group onAccountability Work Stream 2, Human Rights (pdf) (emphasis added)

8) Neustar $NSR merger: Stockholders of Neustar, a domain registry and technology services company, voted to approve the previously announced definitive merger agreement, dated as of December 14, 2016, by the terms of which a private investment group led by Golden Gate Capital will acquire Neustar. At the special meeting held on March 14, 2017, approximately 82% of Neustar shares outstanding and entitled to vote at the meeting were voted in favor of the adoption of the merger agreement. Under the terms of the merger agreement, Neustar’s stockholders will be entitled to receive $33.50 per share upon the closing of the proposed merger. The merger is expected to close no later than the end of the third quarter of 2017, subject to the receipt of required regulatory approvals and the satisfaction or waiver of other customary closing conditions.--Neustar.biz