Internet ccTLDs Are Not Property Subject To Attachment Says US Gov

"No government owns or controls the root level of the Internet. Nor does ICANN or any other single entity. The Internet functions because network operators worldwide have voluntarily configured their computer systems to adhere to common and trusted technical protocols, naming conventions, and address systems. These features are developed and vetted collaboratively by public and private stakeholders, adopted by consensus on a global scale, and administered jointly by stakeholders for the good of the entire global Internet community. The United States has long been the leading proponent of this self-regulatory, decentralized, trust-based, multistakeholder model of Internet governance, which ICANN exemplifies."--from the U.S. Amicus Curiae Brief, infra (emphasis added) 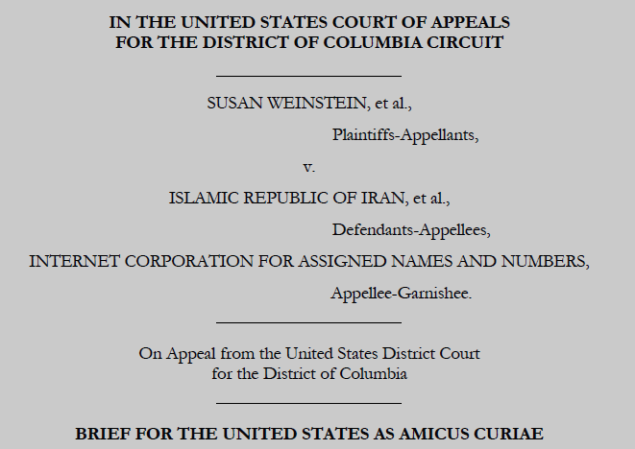 QUESTIONS PRESENTED "This brief addresses whether country-code top-level domains [ccTLDs] are the “property of” or “assets of” the defendant foreign states within the meaning of the FSIA and TRIA and whether Federal Rule of Civil Procedure 69 authorizes attachment here."

ARGUMENT
I. Country-Code Top-Level Domains [ccTLDs] Are Not “Property of” or “Assets of” a Foreign State Under the FSIA or TRIA:

"... Plaintiffs seek to attach alleged property interests [ccTLDs] of Iran, Syria, and North Korea in certain aspects of the Internet’s global name and address system. Plaintiffs have attempted to effectuate that attachment by serving writs of execution on ICANN, a non-profit California corporation that, among other things, facilitates the technical operation of the Internet’s name and address system. This case involves two features of that system: IP addresses and domain names..."


"... If a U.S. court were to order the attachments the plaintiffs seek, it would not merely threaten disruption of the global Internet for millions who bear no fault for plaintiffs’ injuries. It would also derail vital foreign policy efforts of the United States, destabilizing international confidence in ICANN and providing ammunition to foreign states who argue that the keys to the Internet belong in governmental hands. The result would be an Internet that is less stable, secure, and free—to the detriment of users worldwide. Accordingly, the district court’s order quashing the writs of attachment should be affirmed..."

"... At a minimum, there is no reason to believe that Congress intended the terms “property” and “assets” in Section 1610 of the FSIA or TRIA to encompass anything of this kind. In this Court, property ownership under these statutes is governed by federal common law. See Heiser, 735 F.3d at 940-41... A country-code top-level domain is unlike any conventional form of property... none of these sources suggests that country-code top-level domains constitute property. To the contrary, a foundational 1994 Internet governance policy statement, still regarded by the Internet community as authoritative, explicitly rejects efforts to assert property rights in such domains: “Concerns about ‘rights’ * * * are inappropriate. It is appropriate to be concerned about ‘responsibilities’ and ‘service’ to the community.” See RFC 1591, DNS Structure and Delegation 4-5 (Mar. 1994)... such domains are not the property of anyone. A country-code top-level domain is not “granted” to the government of a country; instead, the management of such a top-level domain is “delegat[ed]” to a local manager to “perform[] a public service on behalf of the Internet community” in the relevant region. RFC 1591, at 2 ... country-code top-level domains are distinct from second-level domains, which are commonly acquired and alienated unilaterally by particular entities or individuals under the laws of a particular country and are therefore more naturally characterized as personal property. Indeed, in certain circumstances, federal law treats second-level domain-name registrations as property for some purposes. See, e.g., 15 U.S.C. § 1125(d)(2) (civil in rem action under trademark law) ... Although ICANN is within the reach of U.S. courts, the global Internet exists without regard to U.S. law ... As a technological matter, nothing prevents an entity outside [or inside] the United States from publishing its own root zone file and persuading the operators of the Internet’s name servers to treat that version as authoritative instead ... As we have explained, some foreign states already oppose the multi-stakeholder model of Internet governance generally and ICANN in particular. It is not difficult to imagine that a court-ordered change to the authoritative root zone file at the behest of private plaintiffs would prompt members of the global Internet community to turn their backs on ICANN for good. Such a change would immediately be cited by the countries who advocate full governmental control over the domain name system as evidence that ICANN should not be administering the system ...  Any attempted attachment would thus likely be fruitless in the end, because the putative “property” plaintiffs seek cannot meaningfully be used to offset a judgment. But the result would be devastating for ICANN, for the multi-stakeholder model of Internet governance, and for the freedom and stability of the Internet as a whole ...  "

"... The Syrian government requested in 2010 that ICANN redelegate the .sy domain to a new local manager. ICANN did not treat that request as dispositive merely because it came from the Syrian government. Instead, ICANN analyzed various “public-interest criteria for eligibility,” including the views of “all ten of the private [Internet Service Providers] that operate in the country,” and stressed that the request would be considered in light of “ICANN’s core mission of ensuring the stable and secure operation of the Internet’s unique identifier systems.” Ibid.19 When the roles of ICANN and the managers of country-code top-level domains are understood by analogy to trust principles, it is clear that the defendant foreign states have no beneficial ownership interest subject to attachment under the FSIA or TRIA.20. Under well-settled principles, the corpus of a trust is not subject to attachment to satisfy the debts of the trustee or a trustee’s agent. “If property is held in trust, the trustee has a nonbeneficial interest... the Executive Branch and Congress have repeatedly expressed the commitment of the United States to the multi-stakeholder model of Internet governance and have emphasized the importance of this model to maintaining a stable, open, and decentralized Internet that is free from governmental control. Sovereign beneficial ownership of countrycode top-level domains is anathema to this model and these goals ....”

Oral Argument is scheduled for January 21, 2016