Feature • This past week Q3 2016 reports from two of the biggest tech companies in the world, Alibaba Group and Facebook, each showed stellar results for the quarter: 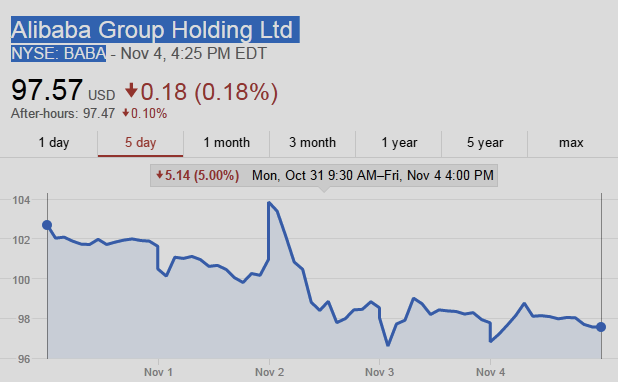 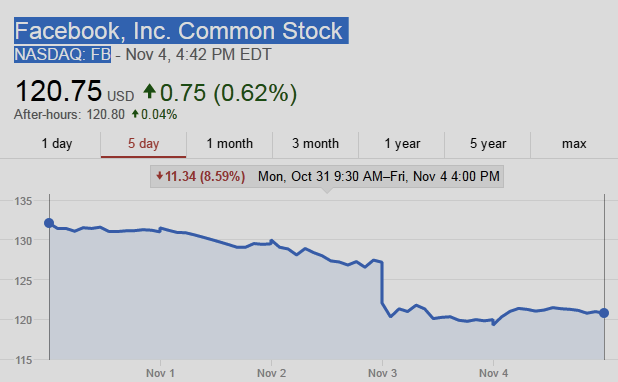 On the other hand, maybe both stocks got caught up in the U.S. Presidential pre-election jitters: S&P 500 index marks its longest losing streak in 36 years | WashingtonPost.com: "... retreat of the stock market ahead of the 2016 election continued Friday, with the market falling for a ninth straight day. Wall Street is now in its longest period of decline in more than three decades [since 1980 when Ronald Reagan won over Jimmy Carter]. Investors continue to focus on the U.S. presidential election, which has become too close for comfort for some investors ... "

Translation: Wall Street thought "the fix was in" and this year's election would be a Hillary Clinton Coronation. A proven stock market metric (86% accuracy since 1928), the S&P 500 index, is signaling Donald Trump will win the election.

•  Huma Abedin doesn’t know how those thousands of Clinton emails ended up on Weiner's hard drive, but we do: If you set up Yahoo on Apple Mail or Outlook or any of the other services, it will store a copy of your email on the hard drive.--McClatchyDC.com

•  Wikileaks Has Chilling Effect on Ambassadorships for big donors including "super bundlers at [Hollywood] studios, networks or agencies"--HollywoodReporter.com

•  Google Cloud? Bloomberg.com: Google was once a cloud pioneer, having spent years stringing together data centers to support its search business. But it squandered that lead by allowing others to market such infrastructure as a service first. Alphabet, Google’s parent, is now intent on narrowing the gap with Amazon.com and Microsoft, in large part because it needs to build a reliable revenue stream that doesn’t come from ads ..." What happpened? 1) Google lost its focus under the leadership of the 'Billionaire Boys' Larry Page & Sergey Brin who were more interested in their money-losing Alpha Bets; 2) Google DNA: “The perception from people is that Google is still quirky to use. It’s like everyone is speaking standardized English, and Google [is] the French speaker.”--Matthew Prince, CEO of Cloudflare.com

•  Has Apple $AAPL lost its way? Apple just told the world it has no idea who the Mac is for | Medium.com. See also: Smartwatch is Dead, Market Implodes, Apple Watch Shipments Collapse | Wolf Street.com: "Apple Watch is still the market leader with a 41.3% share, but shipments collapsed by 71.6% year-over-year, to just 1.1 million watches, down from 3.9 million a year ago. "

•  Google Pixel Camera Flaw Angers Users | forbes.com: "... some users in the same thread remain unconvinced, stating that other types of flare, not covered by the fix, are in evidence from the Pixel’s camera ..."  See also Why Google’s New Phone Will Soon Be Irrelevant | Fortune.com.

•  How smartphones made Shenzhen China's innovation capital | Vox.com: it's all about “consumer-grade smartphone technology.”

•  Why Slack may live to regret its smarmy letter to Microsoft | TheVerge.com "... there’s nothing to be gained from posting disingenuous open letters to the competition."

•  Good Cybersecurity Doesn’t Try to Prevent Every Attack | hbr.org: "It’s far more important to focus on two things: identifying and protecting the company’s strategically important cyber assets and figuring out in advance how to mitigate damage when attacks occur."