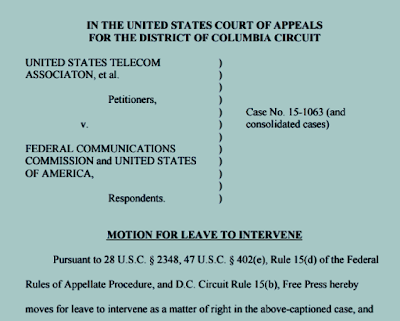 "... Movant Free Press seeks leave to appear in the matter as an Intervenor in support of Respondents FCC and United States of America..." Motion for Leave to Intervene....(pdf)


"Free Press is eligible to intervene in this proceeding. As a national, nonpartisan, nonprofit organization, Free Press works to increase informed public participation in crucial communications policy debates through education, organizing, and advocacy. To this end, Free Press has actively participated in the Protecting and Promoting the Open Internet proceeding. Moreover, Free Press represents members who would be adversely affected by a reversal of the Order because their activities or businesses depend on access to an open Internet." (source: Free Press Motion to Intervene, supra)

Free Press is following the lead of the Internet Freedom Business Alliance and COMPTEL, asking the D.C. court on Wednesday to intervene on behalf of the FCC in the legal fight over net neutrality. If granted, the groups will defend the Title II broadband regulations against the cable and telecom groups trying to stop the FCC’s order. "Free Press will fight the spurious and unsubstantiated claims of the phone and cable companies and uphold the FCC’s decision to root open Internet protections in established law,” Policy Director Matt Wood said in a statement. “This fight includes opposing the industry attempt to get the court to delay the implementation of these fundamental safeguards for Internet users." (source: Politico)

Movants to Intervene on behalf of the FCC include: