UPDATE 2: "Gain on other assets, net, was $7.2 million representing the gain on withdrawals of its interest in gTLD applications during the period" (see below).

First Quarter 2015 Financial Highlights
(Unless otherwise noted, all comparisons are relative to the fiscal first quarter 2014.)
Liquidity and Capital Resources
Business Outlook
For the full year ending December 31, 2015, Rightside reaffirms its guidance :
Total revenue of $210 million to $220 million, inclusive of $6 million to $9 million of GAAP revenue from the registry services business; and
Total Adjusted EBITDA to break-even as Rightside invests margin generated by the business back into driving market development efforts. 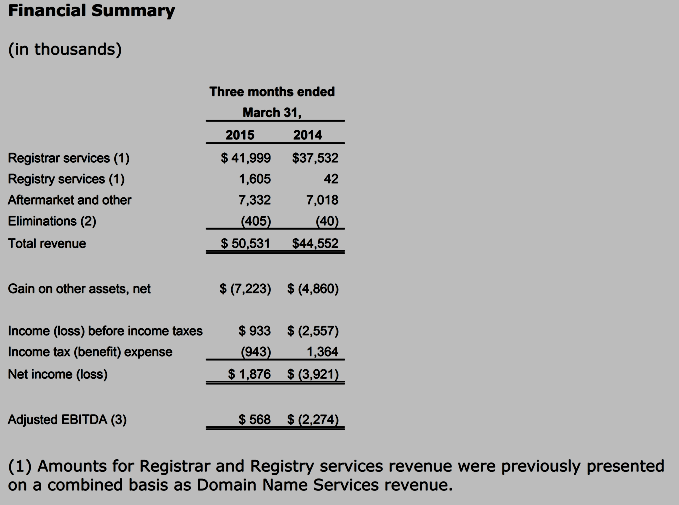 A conference call and audio webcast with investors and analysts will be held today at 5:00 p.m. Eastern Time (2:00 p.m. Pacific Time).

Rightside, with its affiliates, is a well-known provider in the domain name industry. It offers "one of the industry's most comprehensive platforms for the discovery, registration, usage, and monetization of domain names. In addition to being a new gTLD registry operator, Rightside is home to some of the most admired brands in the industry, including eNom and Name.com. Headquartered in Kirkland, WA, Rightside has offices in North America, Europe, and Australia. For more information visit www.rightside.co."  (source: Rightside)