China: Yuan, Markets, Economy, 'Don't Worry, Everything Is Under Control'

China: Yuan, Markets, Economy--'Don't Worry, Everything Is Under Control'--

PIMCO's Crescenzi: No One Knows What China Will Do Next - PIMCO's Anthony Crescenzi discusses his outlook for China and market volatility. He spoke on "Bloomberg Markets" on January 15, 2016 (video above). 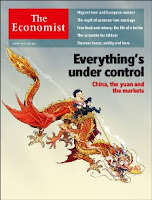 The yuan and the markets | The Economist: "... China is not normal. It is caught in a dangerous no-man’s-land between the market and state control. And the yuan is the prime example ... because a stronger [U.S.] dollar has been dragging up the yuan, the People’s Bank of China (PBOC) has tried to abandon its loose peg against the greenback since August; but it is still targeting a basket of currencies. A gradual loosening of capital controls means savers have plenty of ways to get their money out. A weakening economy, a quasi-fixed exchange rate and more porous capital controls are a volatile combination. Looser monetary policy would boost demand. But it would also weaken the currency; and that prospect is already prompting savers to shovel their money offshore. In the last six months of 2015 capital left China at an annualised rate of about $1 trillion. The persistent gap between the official value of the yuan and its price in offshore markets suggests investors expect the government to allow the currency to fall even further in [the] future ... The government has reacted by trying to rig markets. The PBOC has squeezed the fledgling offshore market in Hong Kong by buying up yuan so zealously that the overnight interest rate spiked on January 12th at 67%. Likewise, in the stockmarket it has instructed the “national team” of state funds to stick to the policy of buying and holding shares ..." (emphasis added, read more at the link above)

See also: Xi’s new model army | The Economist: "... Late in 2014 President Xi Jinping went to Gutian, a small town in the south where, 85 years before, Mao had first laid down the doctrine that the People’s Liberation Army (PLA) is the armed force not of the government or the country but of the Communist Party. Mr Xi stressed the same law to the assembled brass: the PLA is still the party’s army; it must uphold its “revolutionary traditions” and maintain absolute loyalty to its political masters. His words were a prelude to sweeping reforms in the PLA that have unfolded in the past month, touching almost every military institution. The aim of these changes is twofold—to strengthen Mr Xi’s grip on the 2.3m-strong armed forces, which are embarrassingly corrupt at the highest level, and to make the PLA a more effective fighting force ..."