ICANN Sends Letter To US Senators But Does NOT Answer Questions

"The Board is not aware of any conflicts of interest relating to his [Fadi Chehade] activities during his tenure that would require additional steps to be taken in order to remain consistent with ICANN’s policies in effect relating to conflicts." --Steve Crocker, Chairman of the ICANN Board of Directors, April 6, 2016 Letter to U.S. Senators Cruz, Lee, Lankford--see embedded below-highlighting added:

What were the Questions the US Senators were seeking answers to? They were numerous, none of which were answered by Steve Crocker. See letter of April 4 embedded below:

Finally, in regard to Crocker's claim of no real or potential "conflicts of interest," this is a continuing, systemic problem within ICANN, that goes all the way to the top and formed the basis for the US Government threatening to pull the IANA contract away from ICANN in 2012:


The New York Times March 18, 2012: "A boardroom dispute over ethics has broken out at the organization that maintains the Internet address system after its most important supporter, the United States government, reproached the group for governance standards said to fall short of “requirements requested by the global community.”..." (emphasis added)

In fact, some members of the ICANN community recognized and agreed that Fadi Chehade's activities in China constituted a real or potential conflict of interest requiring referral to ICANN's Corporate Counsel in accordance with ICANN policy, but apparently every member of the ICANN Board of Directors failed to recognize, much less refer as required by ICANN policy, the matter--see transcript (pdf) of Non-Contracted Parties House, Intersessional Meeting  at ICANN, February 5, 2016, excerpts below: 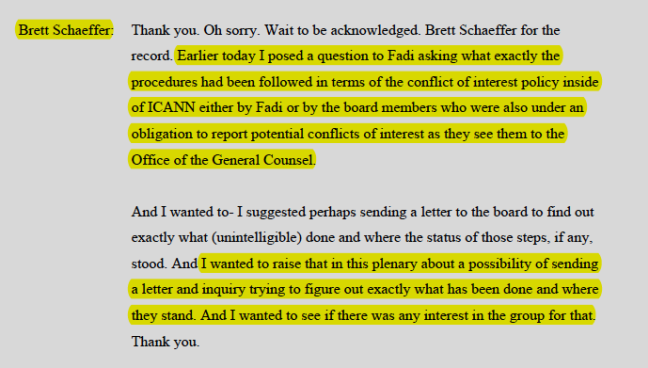 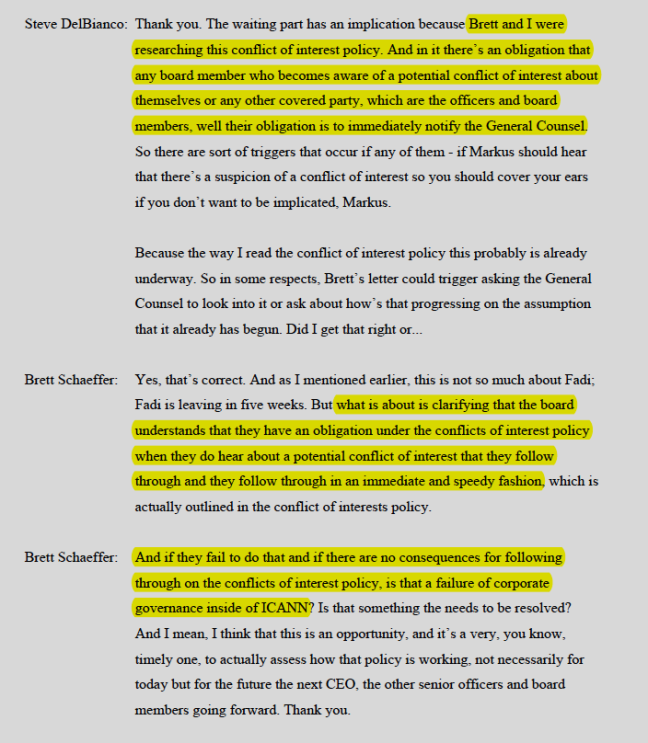 Following which a long discussion occurred among ICANN stakeholders at the meeting, discussing whether to send a letter of inquiry to the Board to find out whether the Board had done anything in compliance with ICANN's conflicts of interest policy. Apparently the ICANN Board did not comply with ICANN's own conflicts of interest policy, nor even recognized a real or potential conflict of interest--just another failure of corporate governance inside of ICANN?

At the very least, this is just another indication that the ICANN Board of Directors needs its own independent legal counsel--not ICANN's legal staff nor Jones Day--and obviously,  needs to be educated about "conflicts of interest."

and After Wuzhen, Should ICANN President & CEO Fadi Chehade Be Fired? | DomainMondo.com