What's happening in the IANA Transition?

• This past week, U.S. Senators Cruz, Lankford and Lee, exchanged letters with ICANN Board Chairman Steve Crocker, fundamentally about conflicts of interest within ICANN, and principally the influence of foreign governments, specifically, the ICANN CEO (now ex-CEO) Fadi Chehade agreeing in December, 2015, to co-chair the High-level Advisory Committee to China's World Internet Conference (WIC) held the last 2 years in Wuzhen, China. Crocker, in his letter of response, wrote a rambling defense and justification of Chehade's conduct without answering any of the Senators' specific questions, essentially admitting that neither he, nor any other member of the ICANN Board of Directors, saw any potential conflict of interest nor anything inappropriate in Chehade attending (while still President and CEO of ICANN), the WIC on ICANN's 'dime' and announcing, via his ICANN President Twitter account, his acceptance of  the offer to Co-Chair the High-level Advisory Committee, thereby, in the eyes of many, lending his support and endorsement, as ICANN CEO, to the objectives of WIC and China's internet governance agenda:


"To whom is the Advisory Committee which Chehade and the others are joining giving advice? It is the World Internet Conference Organizing Committee Secretariat, a CCP [Communist Party of China] organ .... Our opinion is that the advisory committee members are making a mistake. Like so many deluded businessmen and politicians before them, they think that being friendly and cooperative with the [Chinese] regime will either gain themselves privileged access to the market, or will somehow change the basic principles and policy direction of the Chinese state. It may do the first (though it is unlikely) but it certainly will not do the latter. The WIC is intended to justify and advocate a more repressive Internet ... Rather than contesting ideas on a terrain in which internet freedom, bottom up initiative and openness have an advantage, they have foolishly chosen to play the conference diplomacy game on a terrain chosen by the Chinese Communist Party..." --Georgia Tech Professor, Dr. Milton Mueller, December 29, 2015, The Wuzhen Compradors (note: Dr. Mueller has been active in ICANN since its formation in 1998, and is co-founder of its Noncommercial Users constituency).

Read more, including the latest letter from the U.S. Senators and Crocker's reply letter, at ICANN Sends Letter To US Senators But Does NOT Answer Questions | DomainMondo.com, which also references a transcript of the NCPH Intersessional Meeting  at ICANN, February 5, 2016, wherein "ICANN community" stakeholders recognized the real or potential conflict of interest issue in ICANN CEO Chehade's activities in China, and assumed that one or more ICANN Board members had already referred the matter to ICANN's Office of General Counsel as required by ICANN Policy on conflicts of interest.

Those intersessional transcripts [Feb. 4-5, 2016] provide even more insight into the sad legacy that ex-CEO Fadi Chehadé left behind at ICANN--excerpts below--emphasis and links added:

Stakeholder: "... The concerns raised by many in the [ICANN] community indicate that the existing GNSO [ICANN's main policy-making body, the Generic Names Supporting Organization] structure and operating plans do not yet meet stakeholder expectations. Recent statements made by various stakeholders suggest that current ICANN structure [GNSO] needs to be reviewed, and if need be, improved, amended, replaced or supplemented with new mechanisms ... our house [NCPH] suffers more from the structural issues within the GNSO than the other house [the contracted party house, i.e., the domain name registrars and gTLD registry operators] ... We’ve heard claims before that the GNSO is broken and various issues around structure have been raised by various groups ..."

Stakeholder to Chehade: "... for the multi-stakeholder model to succeed, ICANN has to demonstrate some of the best attributes that you would normally find in public service in a governmental setting --transparency, full accountability and conflict of interest [policy] ..."

Fadi Chehade: "I’m going to spend time with him [ICANN's new CEO] mostly on sharing with him the mistakes I did, the difficulties I caused myself because I had not understood well. I did not have the privilege of having time with my predecessor right? I had a coffee with him. And it was not a happy coffee. So I - nobody told me anything."  [Note: this is an odd statement since Chehade was reportedly brought into ICANN by his lifelong friend and former co-worker, then ICANN COO Akram Atallah, who, in turn, was promoted by Chehade to the second-highest paying position within ICANN (it's called cronyism).]

Fadi Chehade: "I’ve learned in these four years that unless he [new ICANN CEO] is listening and deriving his priorities from you, he’s going to have a miserable time. It’s that simple ... See the biggest difficulty for an incoming presidency to ICANN is two parts. The first is his title. The title is a problem because [when] you come in, you think you’re a CEO. You’re not a CEO. This is not a typical CEO job. And so you get into your head all kinds of things about being a CEO that just don’t apply here. And so the title is problematic. And I’ll tell him [new ICANN CEO] this after he signs his offer."  [Note: insightful comment by Chehade, he recognizes the originating source of his problems at ICANN is somewhere inside his "head."]

Fadi Chehade: "I think everyone of you could list my mistakes. I can do it for you to save you some time, you know. I made mistakes. It’s okay."  [Note: it would have been helpful and cathartic for the "ICANN community" to have seen Chehade's list of his own mistakes--frankly, I would not be surprised if many of his well-known mistakes were absent from his list--denial is a well-known attribute of dysfunctional leadership (pdf). Also note that remedies to denial in management include having a "powerful board" (Ravi Mistry), but unfortunately for ICANN, its Board is mostly passive, and therefore, mostly useless:

Is this what happens when an organization is led by a dysfunctional or unprepared CEO, enabled by an equally dysfunctional or unprepared Board of Directors: passing secret Board resolutions, spending hundreds of thousands of dollars and countless hours of ICANN officers and staff time, organizing events and establishing organizations outside the mission and scope of ICANN, instead of focusing on the core issues of improving ICANN functionality, transparency, and accountability?


"... I have personally reached out to operators inside the BRICS countries (Brazil, Russia, India, China, South Africa) to ensure that they know about the Yeti-DNS project, and can participate if they so choose. This reflects my view that if some country decides some day that ICANN cannot be trusted, and they want to create their own Internet DNS system, I want them to have the necessary expertise and competence and awareness of tradeoffs, in-country, to pursue their own sovereign course. If asked, I would advise such countries that any such independence would be nasty, brutish, and short. But I will not pretend that they have to listen to me ... Anybody who wants, for whatever reason of their own, to craft their own root zone as a derivative of IANA's root zone, ought to get all the help they need. Our industry's holy scriptures ought to be written in English not Latin, and ought to be read by the laity, ought to be understood and argued about by the world wide Internet community. Open and transparent network science is no threat to Internet governance ..." --Dr. Paul Vixie, Let Me Make Yeti-DNS Perfectly Clear (emphasis added).

Indeed, is ICANN even trustworthy today? Many, with good reason, say nay.

•Meanwhile, work continues on the implentation phase of the ICANN accountability & IANA transition proposal submitted by ICANN's Board of Directors to the NTIA in March: 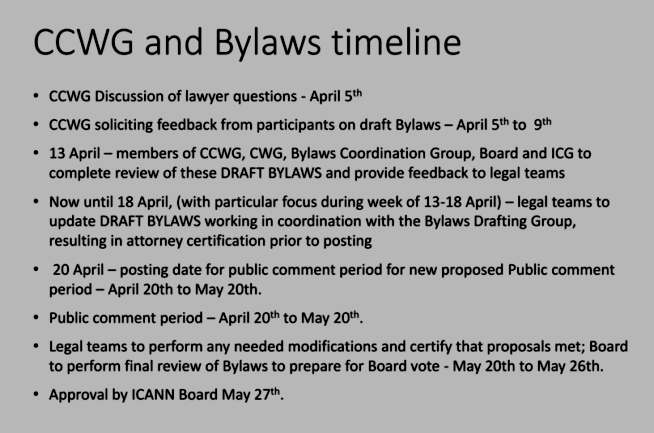 • NTIA is currently assessing ICANN's IANA Transition proposal, a process which it will not finish until sometime in June according to one tentative IANA Transition timeline.

Finally, if you have not seen the video of Elon Musk's SpaceX successfully landing its Falcon 9 rocket on the droneship whimsically named "Of Course I Still Love You" in the Atlantic Ocean, by all means, watch it: SpaceX Successfully Lands Falcon 9 Rocket on DroneShip at Sea (video) | DomainMondo.com.