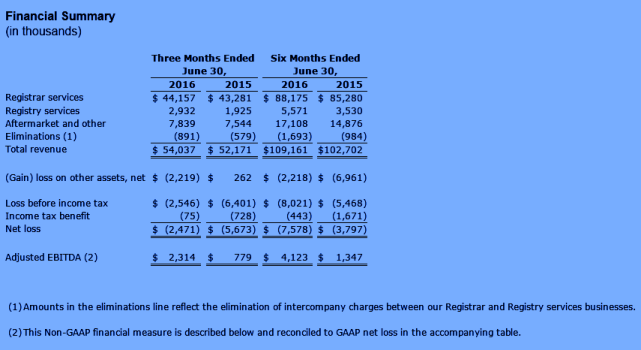 Second Quarter 2016 Financial Highlights
(Unless otherwise noted, all comparisons are relative to the fiscal second quarter 2015.)
About Rightside
The company, with its affiliates, is a leading provider of domain name services, offering one of the industry's most comprehensive platforms for the discovery, registration, usage, and monetization of domain names. In addition to being a new gTLD registry operator, Rightside is home to some of the most admired brands in the industry, including Enom and Name.com. Headquartered in Kirkland, WA, Rightside has offices in North America, Europe, and Australia (source: Rightside.co).

Rightside $NAME presentation at the Canaccord Genuity Growth Conference on August 10, 2016: Taryn Naidu, CEO, and Chief Financial Officer, Tracy Knox, are scheduled to present at the Canaccord Genuity Growth Conference, at the InterContinental Boston in Boston, Massachusetts. Rightside's presentation is scheduled for Wednesday, August 10, 2016 at 8:30 a.m. Eastern time (5:30 a.m. Pacific time). The presentation will be available through a live audio webcast accessible from the Investors section of Rightside's website at http://www.rightside.market. An archived replay of the webcast will also be available for 90 days following the live presentation.

Rightside has 544,266 domain names registered in its 39 launched new gTLDs according to Rightside Registry | Registry Breakdown | ntldstats.com, which makes it the 11th largest new gTLD registry operator with 2.35% market share.