UPDATE: August 23, 2016, Order (pdf) that "Defendant’s [ICANN] time to answer, move to dismiss or otherwise respond to the Amended Complaint shall be extended by thirty (30) days to Monday, September 26, 2016." 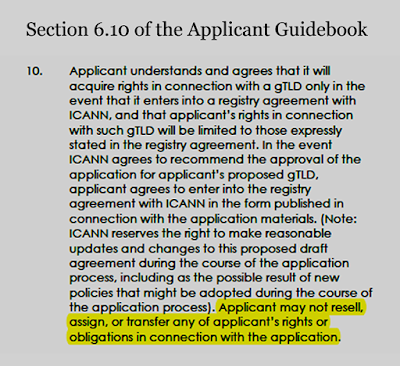 UPDATE in Ruby Glen, LLC v. ICANN: On August 8, 2016, Plaintiff Ruby Glen filed
In its amended complaint, plaintiff Ruby Glen relies, in part, on Section 6.10 (see graphic above) of the Applicant Guidebook. However, plaintiff's interpretation of the last sentence in 6.10 may be misplaced. Reportedly, other new gTLD applicants have utilized arrangements similar to Nu Dot Co and Verisign (.WEB), including for new gTLDs .BLOG and .TECH, without objection from any party or ICANN. Also, reportedly, Donuts own affiliate, Covered TLD LLC (which owns Ruby Glen LLC), granted Rightside rights to acquire Covered TLD’s 100+ applied-for new gTLDs.

Donuts, a privately-held corporation, through its affiliate(s), applied for over 300 new gTLDs and currently operates almost 200 new gTLDs, far more than any other new gTLD registry operator. How much "due diligence" ICANN has actually done regarding the ownership and control of Donuts Inc. is unknown. ICANN hides, or "buries" from public view on its website, much information about new gTLD applicants and their affiliates, subsidiaries, parent organizations, and other "minority" or "controlling" interests. In many, if not most, cases, unless a new gTLD registry operator is a publicly-traded company on a major stock exchange, domain name registrants really have no way of knowing who actually controls the registry of their new gTLD domain name. Ownership and control can easily be hidden from public view by privately-held corporations as indicated in the Panama Papers.

Some have speculated that Ruby Glen (Donuts) never intended to acquire .WEB, but intended to "share in the spoils" as a losing bidder in a "private auction"--a casino-like process sanctioned by ICANN in its new gTLDs program--in which, after paying the new gTLD application fee (or ante) of $185,000 to ICANN, "losing bidders" receive the private auction's net proceeds, as explained here: ICANN New gTLD Private Auctions, 2015 Patsy of the Year Nominees? | DomainMondo.com.

If so, it was unfortunate for Donuts affiliate Ruby Glen, and the other losing bidders, that Verisign was wise to the private auction casino scheme, and as a result, Nu Dot Co insisted on a "last resort" auction where all net auction proceeds are escrowed with ICANN pending their use for public beneficent purposes in accordance with the guidebook. If .WEB had been a private auction, Ruby Glen (Donuts) stood to receive a share of that $132 million, which could have been $22 million or more. Of the 7 bidders for .WEB, all dropped out after the bidding reached the level of $57,500,000 to $71,900,000 (pdf), except Nu Dot Co and 1 other undisclosed bidder (2nd UPDATE: now confirmed to be Afilias not Google/Alphabet's Charleston Road Registry Inc. as earlier reported here). Three of the bidders dropped out very early (by the time the bids reached the level of $15,000,000 to $18,800,000).

As the plaintiff concedes in its amended complaint, Verisign disclosed information to the public by way of its 10-Q filed with the SEC, and a press release a few days later, about its funding agreement with Nu Dot Co in connection with new gTLD .WEB. Unlike privately-held Donuts, Verisign Inc.(NASDAQ: VRSN) is a U.S. publicly-traded corporation, and must comply with all rules of the NASDAQ Stock Market as well as all U.S. laws including disclosure requirements imposed by the U.S. Securities and Exchange Commission (SEC). In addition, as operator of market-dominant  gTLD .COM, Verisign must comply with Amendment 32 of the Cooperative Agreement with the U.S. Department of Commerce, and is also subject to the jurisdiction of the U.S. Federal Trade Commission and the Antitrust Division of the U.S. Department of Justice.

Plaintiff, in its amended complaint, refers to the recent Dot Registry IRP Declaration, and also raises similar claims as raised by the plaintiff in the DotConnectAfrica [DCA] Trust vs. ICANN litigation concerning the enforceability of the "Purported Release" of ICANN in the Applicant Guidebook. However, the relevance of either the Dot Registry IRP or DCA Trust litigation, to the facts in this case, is questionable.

This is the kind of case that law firms like Jones Day (domain: jonesday.com), ICANN's legal counsel, love. The U.S. District Court Judge has already denied plaintiff's motion for a temporary restraining order, so you can expect an aggressive defense on behalf of ICANN.

ICANN has two weeks to file its answer to the amended complaint in accordance with Rule 15 of the Federal Rules of Civil Procedure (a) (3), which provides "Unless the court orders otherwise, any required response to an amended pleading must be made within the time remaining to respond to the original pleading or within 14 days after service of the amended pleading, whichever is later."